Dell took the semi-transparent lid off their new Windows 7 slate, the Latitude ST, today and it’s already been reviewed.

The thoroughly leaked tablet became official on the Direct2Dell blog (via Engadget). It’s not loaded with crunchy bits like tech specs but rather focuses on the benefits to different markets, such as enterprise, health care, and education, to which the slate is targeted. Of interest are their partnerships with organizations and software makers in these fields. Also included is the previously leaked promo video. 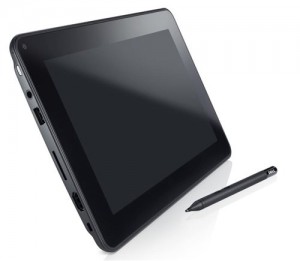 That announcement, however, opened the door for Tablet PC Italico to publish the official specs on their site and share an indepth first-look review of the hardware.

Spec-wise, it’s similar to previous Windows tablets running the Intel Atom Oak Trail processor, including an N-Trig pen + multi-touch digitizer under a 10″ display. However, the review notes the performance feels noticeably better than that of the Fujitsu Stylistic Q550, which felt woefully underpowered to me. They speculate it could be the result of an improved SSD or updated drivers. Regardless, this is the news I find most assuring.

A few other high points include the 16:10 screen ratio (which I feel is better than 16:9 for mixed portrait and landscape usage), high resolution front and rear cameras (though high-res does not necessarily indicate high-quality), and a rotation lock button. Despite some clumsiness in the Google-supplied language translation, the review conveys a good sense of the feel for the machine, which is so important when you can’t try before buying. Please click over to Tablet PC Italico (translated) to read the full review.