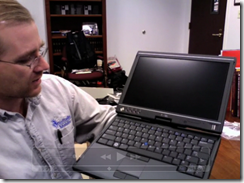 The Dell Latitude XT Tablet arrived just a few hours ago. I’ve already recorded the unboxing and will be posting that up later tonight / tomorrow. Here are some fresh first impressions after just opening the box a few hours ago.

Stay tuned for the unboxing video and more usage articles over the coming days as I put the XT to the real test – actual usage.