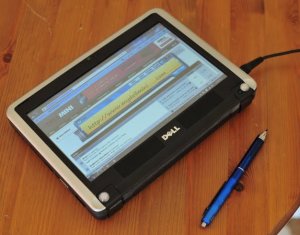 After reading Michael Dell’s comments on netbooks today, I wonder if maybe he’d be interested in taking the Dell Mini line in a new direction, as one adventurous modder did with his Dell Mini 9 Tablet project.

As posted on the MyDellMini forum, a fellow going by Rob928 took apart his Dell Vostro A90 and reassembled it with a Hoda Technology solderless touchscreen kit to create a pretty sweet-looking slate. Built from a netbook, it’s hardly a heavy lifter, but this model has quite a few mobile-friendly amenities, including Bluetooth, .3MP webcam, 1GB RAM, and 16GB SSD.

Rob is looking to add an accelerometer for screen rotation and possibly a USB fan to compensate for losing the ventilation previously provided by the keyboard. He also mentions that the touchscreen is not great for pen input, but “Windows 7 really makes it a lot easier to have a computer running soley on touch.” Nice.

Lots and lots of photos posted on the MyDellMini forum, including assembly shots. Hat tip to Engadget.