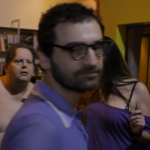 Someone’s gone through a lot of trouble to make Dell look like it’s using video of a heavyset man farting powder into the air to promote the company’s personal computers. Dell’s currently running a marketing campaign called Take Your Own Path that features business leaders of both small and well-known companies. The Visual Innovators video dovetails almost perfectly into Dell’s campaign until you watch the second half of it, which is when a nude model walks into the frame and proceeds to fart powder into the air as artist  Clayton Sotos photographs the whole affair.

Clayton Sotos, a supposed Russian-American photographer who loves Dell products tells the story of his life and how he views the world. The video shows him wandering around New York, examining his surroundings for inspiration. About 90 seconds into the video Sotos talks about how “only Dell Inspiron is all I need to create a successful venue to communicate and share my passion.” He proceeds to set up his studio and bring a nude man into the frame.

If you’re in the mood to see some awkward art photography you can watch it on your own below.

Whoever put this video together put a lot of time and effort into it. The videography and production quality easily passes as something Dell or another large tech company could have produced. The video closes by directing visitors to Dell.com/takeyourownpath, where Mr. Sotos is nowhere to be found. Clayton Sotos’ site is suspiciously thin for a photographer that’s been in the industry his whole life. There’s an accompanying site for Visual Innovators that has the same registration info as Sotos’ site rather than Dell’s information.

When I first started watching this video I had high hopes that Dell was getting a bit more creative with marketing to creative professionals. I grew up in the art world, so it wouldn’t be the least bit shocking if Sotos was indeed a real person who made his living in this manner. But it appears to be an unrelated third-party poking fun at the PC manufacturer. Well played, whomever you are.