After the launch of the Latitude ST tablet running Windows 7, there has been high hopes that Dell would launch a Windows 8 slate in the form of the Latitude 10. The company isn’t disappointing and in a leaked presentation slide, it appears that the company is working on one with Intel’s dual-core Atom processor inside. The tablet will also ship with 2 GB RAM and a 128 GB SSD, which is twice the solid state flash storage of Apple’s iPad at this time.

According to Neowin, the Latitude 10 will get between six to eight hours of battery life on a single charge and a larger swappable battery will yield up to twelve hours of computing life. 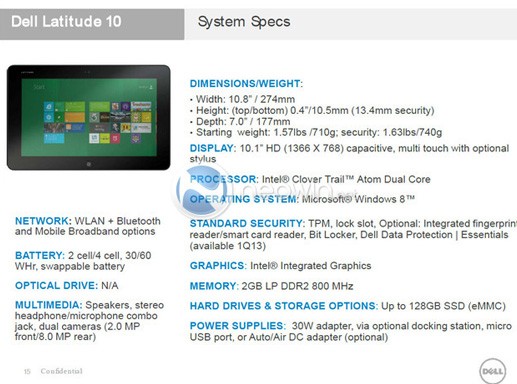 The tablet will have a 10.8-inch display with a 1366 X 768-pixel resolution. There will also be a biometric fingerprint scanner–great for enterprise users–and also Intel graphics on board to accompany the Atom CPU. The company also is making more powerful tablets under the Latitude XT moniker.

According to the leak, this slate will be launching in the late fall or November timeframe. At this time, pricing information has not yet been announced for the Latitude 10.

In appearance, the tablet looks very similar to the Latitude ST and the Samsung Slate 7. Rival computer-maker HP is also speculated to be working on a Windows 8 tablet. Dell also is working on Android tablets for the Chinese market under the Streak moniker after having withdrawn from the U.S. Android tablet market.