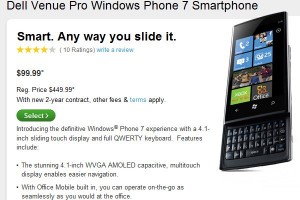 After some early problems with Dell’s first Windows Phone 7 handset, the Venue Pro is now finally available to order through Dell’s website. The device represents one of the more unique form factors for Windows Phone 7 as it takes on a portrait-oriented sliding keyboard, that when open resembles a BlackBerry and can be more easily targeted at enterprise customers who are familiar with handset from Research in Motion.

The Palm Pre-esque device will cost $99.99 on a two-year service agreement from T-Mobile USA–unfortunately the handset doesn’t support AT&T’s 3G network in the U.S.–and will cost $449.99 sans contract for the basic 8 GB version. The more capacious 16 GB version will cost an extra $50 more on both contract and non-contract prices at $149.99 and $499.99 respectively.

The Venue Pro is expected to ship on December 9th, barely making it in time for the holiday shopping season. The device will utilize Microsoft’s user interface for Windows Phone 7 called the Metro UI, which will have “hubs” for different environments. A productivity hub will house your Office documents and other work-related files while a music hub will take you to your media library or to connect with Zune.

The device utilizes a 4.1 AMOLED touchscreen display with a WVGA (480 X 800 pixels) resolution, a 1 GHz Snapdragon CPU from Qualcomm, and will come with a 5-megapixel camera, 3G support for T-Mobile, along with WiFi and Bluetooth radios.

The Venue Pro represents Dell’s return to Microsoft’s mobile platform after having exited the PDA line of business some years ago with its Axim handheld, which at the time used the Windows Mobile operating system. Since the Axim, Dell had taken a break from the mobile world and recently came back with a few Android smartphones and is looking to expand its Streak tablet lineup in the future. Dell, thus far, is committed to both Windows Phone 7 and Android, though the company has publicly stated that it’s easier to make Windows Phone devices than Google’s Android OS. The company has expressed confidence in the Venue Pro, and is committed to giving its own employees the phone to use.