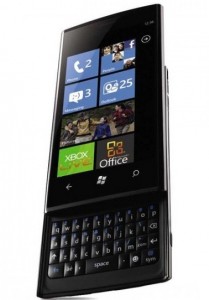 After having been launched for T-Mobile USA’s AWS 3G network, Dell’s first attempt at a Windows Phone 7 will make the jump for AT&T subscribers as well as the Venue Pro is now available for just $99 on a 2-year contract. The device features a portrait-oriented sliding QWERTY keyboard, similar in style to the Palm Pre, and also a curved flass display that gives it a refined and elegant look.

When it first launched, anticipation was high surrounding the Venue Pro, but Dell had supply issues along with problems that led to the handset being hard to find initially.

The Venue Pro is the only device with a portrait-oriented keyboard running the Windows Phone 7 operating system to date. HTC has made the HTC 7 Pro, which had landed on Sprint as the HTC Arrive, with a landscape-oriented keyboard.