Not content with just showing off some of its newer machines, Dell is also refreshing its high-end Windows 8 convertible, the XPS 12.

This newly updated Dell XPS 12 will physical look identical to the XPS 12 we gave our Editor’s Choice award this past year, keeping the same aluminum lined hinge and flipping touchscreen that made it unique and the Carbon Fiber base it first inherited from the Dell’s XPS 13, another GottaBeMobile’s Editor’s Choice recipient.

Inside is where all the magic has happened, with a slightly bigger battery and Intel’s new Haswell processors, this XPS 12 will boast 9.5 hours of battery life, light years ahead of what the current model delivers. For the record, today’s device delivers about 5 hours of productivity before having to recharge. 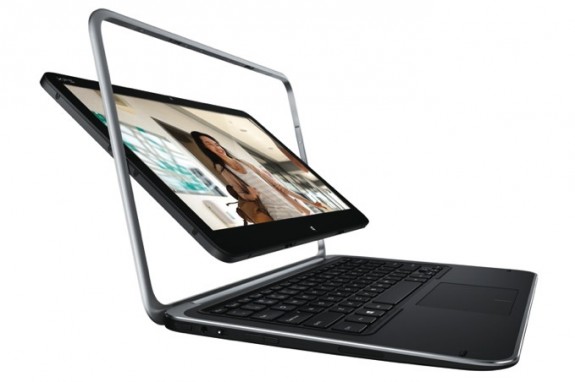 Dell will also add an NFC or a near-field-communications chip to this device so that users can presumably make use of the instant NFC printer sharing features Microsoft showed off yesterday at its TechEd Conference.

This new XPS 12, will begin shipping on June 9th for $1,200 in most regions according to Engadget.

While that functionality is Windows 8 today, Microsoft plans to ship enhanced NFC support as part of the Windows 8.1 update that will be available free to all Windows 8 users sometime later this year. That update will also include other features designed to make the Windows 8 experience enjoyable for users on devices with touch screens including a more customizable home screen and updated Music and Video applications.

As mentioned this XPS 12 will join a line that’s seen updates to Intel’s Haswell processors across the board. Simply by replacing the processors included in today’s machines with a Haswell core i5 or i7 processor, Intel says manufacturers will see battery life improve by a third.

While simply adding a newer processor for more battery life might have been enough to help it standout in the Windows convertible landscape just days ago, Dell’s XPS 11 could entirely steal this device’s thunder. That device ships with an 11 inch screen that can be folded behind a seriously thin base to create a seriously lightweight and innovative tablet experience.

Unfortunately Dell isn’t ready to talk about specifics like pricing for the XPS 11. It has said that it plans to make it available in time for this year’s holiday season.