Engadget got a hold of some slides of Dell’s entry into the ultra-net-sub-mini-low cost-notebook market and it looks like Dell might have decided that Asus doesn’t own all the E’s in this space. Although the naming might change, at the moment it looks to be called the Dell ‘E.’ Not only do the slides reveal an 8.9 inch ultra-portable, but also a 12.1 inch model called the ‘E Slim,’ which is going after the thin market. Supposedly the ‘E Slim’ is 0.8 inches thick. 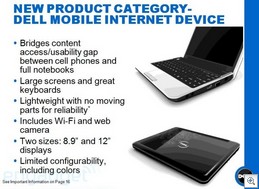 Other interesting news from the Engadget post, Dell is also adding in Linux based Instant On called BlackTop. No conclusive evidence as to whether or not this is related to Splashtop.