We met with Dell executives recently in San Francisco, California where the company demoed the new XPS 11 convertible Ultrabook for us, which comes with Intel’s latest power-sipping, performance-packing Haswell processor. The device could either be used in laptop mode for those who prefer a keyboard experience for typing or in the new tablet mode where the screen rotates a full 360 degrees around the hinge.

The design of the XPS 11 is very similar to what rival Lenovo has been doing with Yoga series of convertible Ultrabook, however in this case Dell opted to use a thin membrane-like key similar to Microsoft’s Touch Keyboard for the Surface tablets instead of mechanical keys. 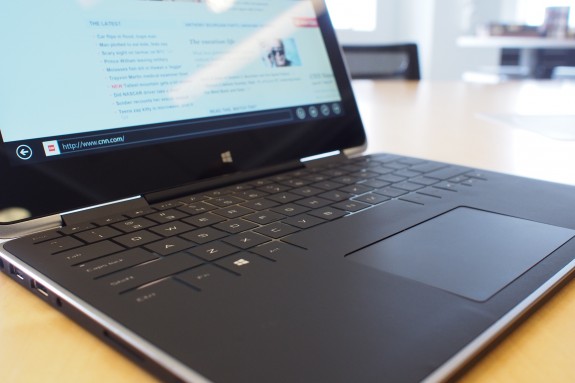 Touch keys rather than mechanical keys on the Dell XPS 11 keyboard.

According to Dell, the reasoning is that when you rotate the screen around in tablet mode and the keyboard is exposed, this will lend to a more secure feeling so your fingers aren’t pushing the keys on the underside when you’re gripping the tablet.

The keyboard is also backlit for those who need to type in the dark.

The design decision to go with membrane keys also helps to shave weight and thickness from the overall package, and the result is a very nice, slim, and sleek Ultrabook design that’s part of Dell’s premium XPS brand. 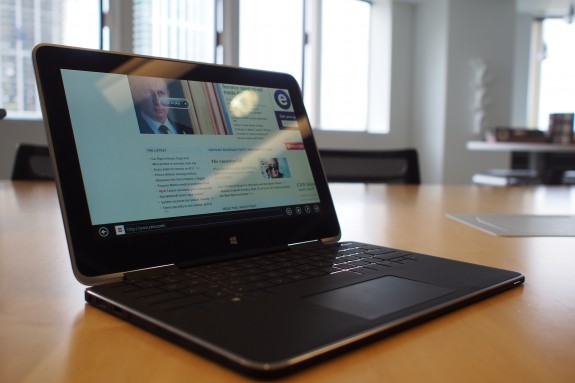 The package is constructed with materials like carbon fiber, machined aluminum, and glass for the display. The 11.6-inch display is also very high resolution with a Quad HD (2560 X 1440-pixel) resolution. It’s also very bright with 400 nits of brightness, and when I previewed the tablet the screen was just stunning. 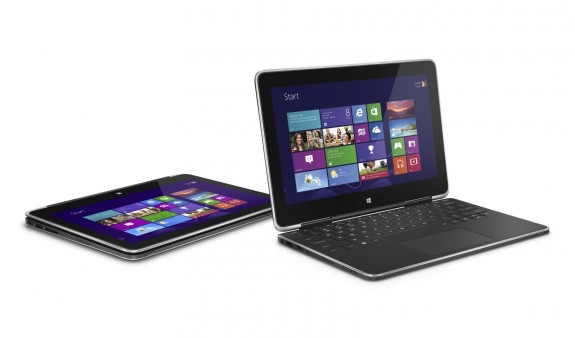 There is 4 GB of RAM on board and users can choose from storage configurations of 80, 128, or 256 GB SSDs with Intel’s Rapid Start Technology.