Dell’s XPS 13 ultrabook, which has a footprint closer to that of the MacBook Air 11 than the comparable 13-inch MacBook Air, is now available for shipping. Customers interested in Dell’s first foray into the ultrabook category can visit Dell to order theirs today. The device is being billed a a high performance and lightweight laptop by Dell, which announced recently that it would be exiting the consumer PC space and is focusing on enterprise IT.

The XPS 13 was demoed at CES earlier last month, and the device is one of the best laptops to ever be made by Dell. The system is definitely geared towards mobile warriors on the go with technologies like Smart Connect from intel, which continues to synchronize Outlook and Exchange data–including emails–even while you’re computer is in sleep mode while connected to a WiFi network. The XPS 13 also has Intel Rapid Start Technology, which can resume from sleep in just 1-4 seconds. These features are unsurprising for Dell, which has been known in the past for utilitarian features. What is surprising, is the XPS 13’s good looks. 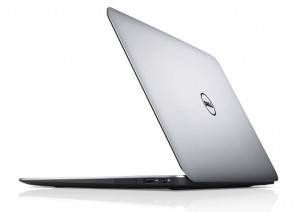 Featuring a Gorilla Glass display, machined aluminum cover, and carbon fiber carriage, the XPS 13 features a striking design that’s pleasing and welcoming to behold. Because unlike Apple’s use of aluminum on the undercarriage, Dell’s implementation of carbon fiber makes the device less cold to the touch when you first turn it on, which makes it more welcoming and less cold. What’s impressive is the near edge-to-edge display, which gives the XPS 13 a small footprint that’s more similar to something found on an 11- or 12-inch ultraportable than a 13-inch, making it compact.

According to PC Pro, Dell’s Brad Anderson, who heads the company’s enterprise solution group, says, “We’re no longer a PC company, we’re an IT company.” However, with the success of the XPS line, Dell continues to invest in the PC segment. And that’s a good thing as the XPS 13 looks like it will be a strong contender in the ultrabook space.