Destiny Companion App Arrives in Time for the Destiny Beta

We’re mere hours away from the Destiny Beta and though the download isn’t yet available, PS4 users can kick off the festivities a bit early by download Destiny Companion, the second screen experience for the highly anticipated first-person shooter.

Bungie, developer of Destiny, revealed their companion app for the game a few days ago. Just in time for users to get a decent look at their character’s costume upgrades and more. During the Destiny Beta users of the Destiny Companion app will be able to compare the achievements and trophies they’ve earned with that of their friends, and private message each other through the game’s forums. There’s even a stats tracker that makes it easier for users to get a handle on what weapons and attacks are more effective. Destiny Beta players can also track their kill-to-death ratio as a sort of mini game. 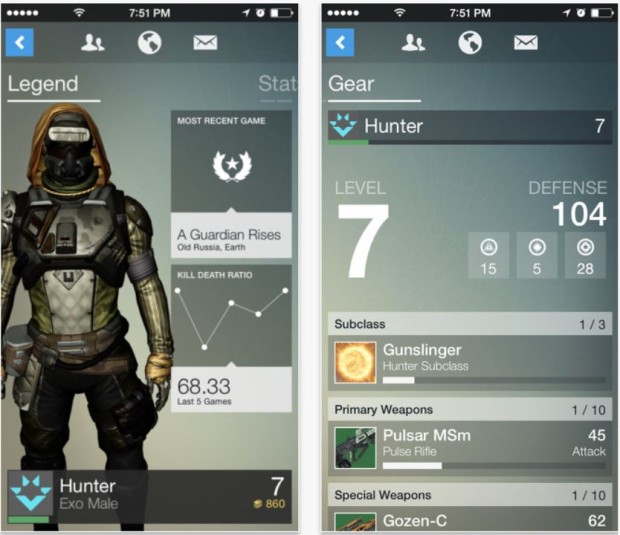 Overall the best feature here has to be that players can actually change their character in the app and have those changes reflected in their character on their television. That might sound extremely basic, but it’s something most companion apps don’t do. Inventory tracking is also here too. Destiny is a role-playing game after all, and it’s this app that’s going to help make things like character creation and management easier. Typically, game developers have watered down things like this in console-only role-playing games.

Ironically, the once Microsoft-owned Bungie isn’t providing a companion app for users of the company’s Windows Phone operating system. That means if you’re an owner of a Nokia Lumia headset you’re out of luck. There isn’t a version available to users of Microsoft’s Windows tablet operating system either. Luckily for those users, Bungie has a pretty decent track record of letting users track statistics and modify character attributes on their website. At least, it did with the previous series of games it developed, Halo.

To understand why the Destiny Beta is such a big deal, you first have to understand the nature of console role-playing games themselves. Many developers have tried to take paradigms originally designed for the PC and port them over to the PlayStation and Xbox. In most cases there almost always feels like there’s something lost in translation. By comparison, Destiny seems to be made for hard-core consoles players from the ground up. Instead of just mashing buttons, Destiny’s combat relies on the more exciting first-person shooter mechanic.

PS4 and PS3 users should begin getting invitations to download the Destiny Beta to their console shortly. Unfortunately, Bungie and Destiny publisher Activision are making Xbox users wait a bit. The Destiny Beta won’t launch on the Xbox One and PS4 until July 23rd. The entire Destiny Beta will end on July 27th. When it does, presumably, Bungie will take what it’s learned and apply it to the final version of the game.

The final version of Destiny is scheduled for release in North America on September 9th. The game will be available on the Xbox One, PS4, PS3 and Xbox 360. Despite this, PlayStation users who purchase the game’s limited edition versions will get access to exclusive content that won’t come to Xbox users until the fall of 2015 at the earliest.