Destiny announced more House of Wolves details this morning on its official news blog. A bit of info and a new trailer are just about all we’ve seen of House of Wolves, which is the second of two large-scale upgrades for Destiny that Bungie revealed shortly before the game’s release. 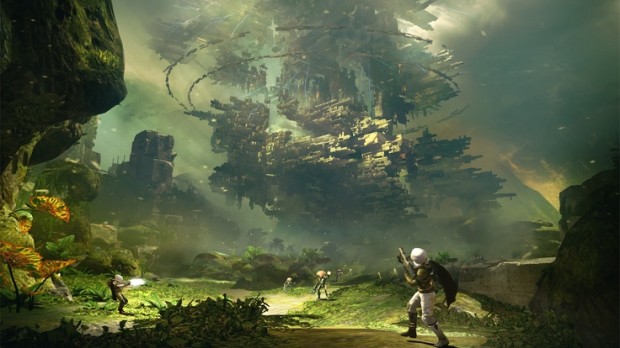 For starters, the House of Wolves release date is May 19th. That’s roughly five weeks away from today. A nearly two-minute long trailer shares some details about what players can expect. The first thirty-seconds of the new House of Wolves trailer is just tone setting. Soon after, a voice can be heard discussing how she protected something called The Reef from being destroying by Fallen, The Fallen are Destiny’s bad guys.

The voice reveals that she took the Fallen in, “offering them a home among the Awoken.” The voice says that the creatures she took in betrayed them and sounds of people being slaughtered are heard. At the end of the trailer the voice is heard giving the order to let Guardians – those are players – into the Reef. Text included in the blog post provide more details about what’s seen in the House of Wolves trailer.

Bungie says that “The Reef will open to all Guardians.” Apparently, the Queen is the voice heard in the trailer and her forces will team up with players to deal out punishment to the Fallen. Bungie says it plans to share more details about the add-on content over the coming month. New activities, modes, events and gear are all mentioned, though now details are provided.

Video game website Polygon speculates that House of Wolves may involve players having to journey out to the solar system’s Asteroid Belt. The outlet is assuming that sense leaks back in February indicated that was the set location and actually included a potential release date of May 19th. Leaks also included a new storyline for the Awoken. Allegedly included is a new raid too, the third of such invents featured in the game. Three new maps for the Crucible game type and another strike could come as well.

Destiny arrived on the Xbox One, Xbox 360, PS3 and PS4 back in September of last year. Bungie and publisher Activision’s marketing for the game hinted at more story and immersive only game play. Those who’ve played the game say that Bungie never delivered on either, which is why House of Wolves is so important. Instead of playing missions over and over for the latest gear, Bungie is hoping that this update will arrive without forcing players to re-earn all of their valued weapons.

Getting the House of Wolves update should be pretty easy. Those who picked up the Destiny Expansion Pass can look forward to the House of Wolves update coming to them at no additional cost. The update should download immediately once it’s available on the Xbox One and PS4. Xbox 360 and PS3 users will need to start the download manually on May 19th.

Those who are new to the game or don’t have the Expansion Pass already still have a chance to save. $35 gets users access to House of Wolves and the first major update released for the game, The Dark Below. The Expansion Pass is available online in the PlayStation Store and Xbox Live from games retailers like GameStop.

Destiny is available for around $35 on Amazon. Players will need a full copy of the game to take advantage of the two expansions.