Samsung might be pushing the Samsung Galaxy Gear, it’s first entry into wearable computing, as a device that will define a new consumer electronics class, but if the blog post detailing the features users can expect from the Pocket application for the device is an accurate indication, the device may be even more focused on companion experiences than originally thought.

Shortly after Samsung wrapped up its IFA 20013 press event, Pocket detailed the experiences Samsung Galaxy Gear users can expect from their application when the smartwatch launches later this year.

According to the blog post, Pocket for the Samsung Galaxy Gear won’t allow users to browse their news stories, instead the application will act like a second screen to the version that runs on Samsung smartphones. Users will be able to use the application’s Text-to-Speech systems to listen to articles they are interested in without having to remove their smartphone from their pocket. Users will be also be able to pause and control audio playback from the Galaxy Gear. 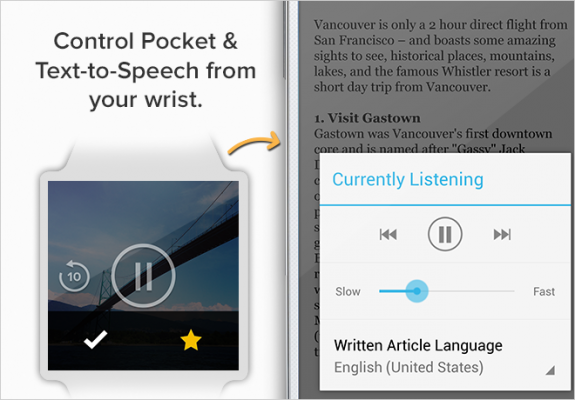 Pocket on the Samsung Galaxy Gear.

While being able to listen to articles using the device isn’t a small feature, the relatively light feature set of one of the first applications for the device highlights a problem that users purchasing the Samsung Galaxy Gear this fall will have to contend with. Since the Galaxy Gear depends on the user having a Samsung device to pair it with for a mobile internet connection, users will have to decide if its $299 price tag is worth it.

If the device’s applications can’t act on their own accord, it’s likely that most users would consider that another strike against a device that Samsung is hoping will capture the imagination of users before Apple enters the market with the iWatch that many industry insiders have been predicting for some time.

In addition to running applications on its 1.6-inch Super AMOLED screen, users will able be able to answer phone calls and monitor their email inbox using the Galaxy Gear.

So far, Samsung has yet detail how users will get applications for the Samsung Galaxy Gear when it debuts this September internationally, and October in the United States.