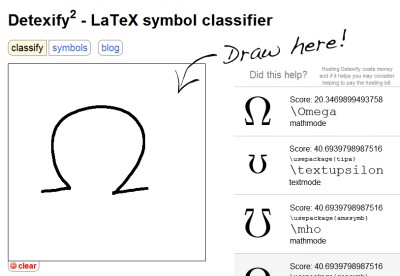 Designed to help LaTeX users find special characters by drawing them instead of hunting through an index, Detexify2 is moving us one step closer to web-based handwriting recognition. Just draw a character in the specified area and in seconds, a list of matches pops up on the right-hand side.

As you can see from my sample, it offers a range of selections even if they aren’t all spot-on, but given the majority of users would have to rely on a mouse for input, the broad approach should work out for the best. Actually, I’m pretty impressed the search wasn’t tied to a particular orientation, offering upside-down interpretations of my omega symbol. I could see some use for that. Also impressive that it relies on HTML 5 for the input, as opposed to a plug-in.

I can see this being easily applied to character-based languages, such as Japanese, with recognition for English and other letter-based languages potentially growing out of it, perhaps offering online handwriting recognition solutions for the bevy of inkless touchscreen web devices that are rolling out.