A third-party app developer who has been tracking which devices are accessing and using his apps notice an unannounced Apple tablet has been using his app, and curiously that device uses the newly minted A6 processor that debuted alongside the iPhone 5. It’s unclear if this tablet is running the same CPU that’s found inside the iPhone 5 or a variant of that design.

Apple creates its chips based on designs from ARM technologies but the A series processors inside the iPhone, iPod Touch and iPad are designed by Apple. 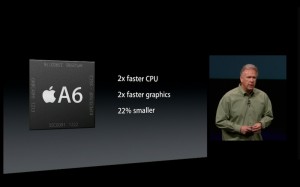 The device in question goes by the model number ‘iPad 3,6,’ which could mean that it’s a variant of Apple’s latest third-generation iPad. When Apple had debuted the third-generation iPad this past spring, it did so with an A5X CPU.  The numbering scheme would match the various variants of iPad 3 devices out there, as those devices have model numbers of ‘Ipad 3,1,’ ‘iPad 3,2,’ and ‘iPad 3,3.’

In the past, there have been rumors that Apple may introduce a slight refresh to the third-generation series device to bring the new Lightning connector to the tablet following the switch from the more traditional 30-pin Dock Connector to the Lightning protocol on the iPhone 5.

It’s believed that the iPad 3,6 model won’t be the rumored iPad Mini with a 7.85-inch display. That device is said to be based off of the iPad 2’s specs and will carry the iPad 2,5 and iPad 2,6 model designations.