While it’s been long rumored that Microsoft will be adding support for full HD 1080p displays with a future software update for Windows Phone 8, that information is now nearly confirmed. Visual Studio 2013, which is used by developers to develop apps for the platform, is now allowing developers to emulate their apps to a 1080 X 1920-pixel display, suggesting that the feature will indeed be coming at a later date. 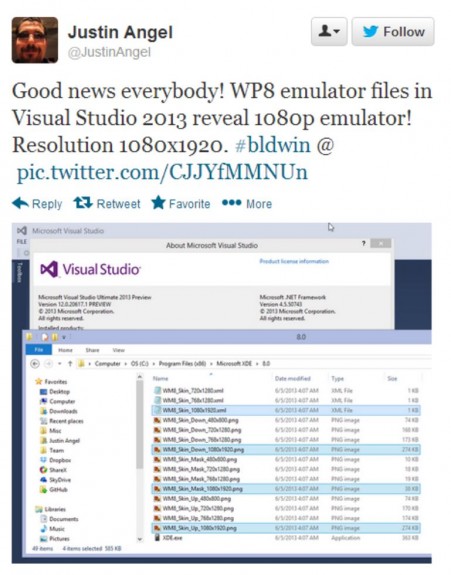 An emulator allows developers to see what would be shown on a Windows Phone on their desktop computers. This way, developers can have visual feedback as to how their app would look, feel, and work. Given that emulators are created for testing apps, Microsoft likely wouldn’t have added 1080p HD support unless it’s coming, else it would confuse developers and the feature on the emulator would be superfluous.

The support had been rumored in the past to arrive with the GDR3 software update, which would be coming at the end of this year or early next year. Currently, the GDR2 update is shipping with the Nokia Lumia 925 smartphone and that software update would become more widely available to other older phone models in the near future.

In addition to support for 1080p displays, the GDR3 update is also rumored to support quad-core processors. Migrating from Windows Phone 7 to Windows Phone 8, Microsoft added dual-core CPU support, however Android handsets are now running on quad-core chips and Microsoft would need to keep its platform competitive on paper. Quad-core support may not be that necessary on Windows Phone, however, as the platform runs fluidly still on a dual-core setup.