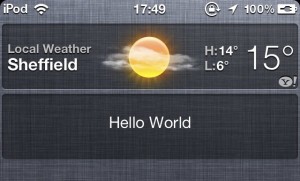 As part of iOS 5’s new revamped notifications mechanism with a slide-down notifications bar, similar to Android, Apple had also included two widgets for Notification Center for weather and stocks, but has thus far not opened up to third-party development as there is a lack of a widget SDK. However, jailbreak developers and hackers have managed to tap into Apple’s Notification Center engine in spite of not having an SDK and was able to develop a proof of concept widget to show that this is in fact possible.

A simple widget displays ‘Hello World’ and is shown with the same font style and background as Apple’s weather widget. Famed jailbreak hacker Chronic notes that to develop third-party widgets, developers would need to tap into the “custom view interface” and “compile it is a bulletinboard plugin.”

Currently, widgets on iOS 5 seem to only be compatible on the iPhone and iPod Touch, but not the iPad. With the iPad’s larger screen sizes, perhaps Apple is thinking of a different user experience to widgets, perhaps taking on concepts like its Spaces build for tablets, or allow widgets to take up more of the screen in a separate panel, like on OS X, to replicate a more desktop-like feel rather than the experience of a scaled up smartphone appearance.

It’s still unclear if Apple intends on opening up Notification Center in a future developer build of iOS.