A new keyboard called Fleksy might have outed Apple’s plans to open up their keyboard API to third-party developers, allowing users the flexibility of a different keyboard for entering text on the iPhone, iPad and iPod Touch. If so, this brings one of the most requested features to the iOS platform. It also helps Apple compete against Android in an area that Android aficionados often say make their chosen platform better than Apple’s.

The app maker’s website offers a look at the iPhone showing off their keyboard. At the top fo the page it says “Hold for Release” and below that a sentence saying, “The wait will be over soon. Thank you for signing up!” The image rests below that. Users can also enter their email to get access to the app. 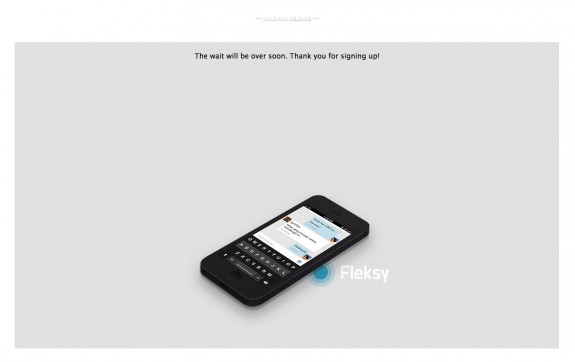 Could this be the first app to use an open keyboard API in iOS 7?

It’s possible Fleksy used the WWDC 2013 excitement to grab attention with their “leak” of the coming app. After the announcement they can simply claim they accidentally hit publish before Apple opened up the keyboard API. They might explain, “The website and a YouTube video showed up by accident.”

Rumors coming before WWDC 2013 said that Apple might open up their keyboard API letting company’s like Swiftkey or Swype and other onto the iOS platform. Swiftkey CEO stated that Apple should let them into the iOS arena.

How does this benefit users? Android users enjoy a bevy of keyboard input replacements right now. For example, Swiftkey gives users an excellent prediction feature that helps people type faster. Enter the first few letters and the keyboard app analyzes the context and offers a few predictions that many users claim get it right more than not. The makers of Swype brought text entry where users don’t lift their finger off the keyboard. Instead they drag their finger from letter to letter and the keyboard app understands what the user intended to enter also offering possible words. Accept the word the keyboard app inserted or tap one of the other options listed in a row above the keyboard.

Users who try both iOS and Android devices often struggle to switch from these excellent Android keyboards when they return to iOS.

If Apple opens this feature up, maybe they will relax other limitations they’ve put on users. We could also see interaction between apps like we’ve never seen before.