It appears Google did block the YouTube application that it co-developed with Microsoft for the Windows Phone operating system.

Google confirmed that it was in fact blocking the recently re-released application in a statement to The Verge, saying that “Microsoft [had] not made the browser upgrades necessary to enable a fully-featured YouTube experience, and has instead re-released a YouTube App that violates our Terms of Service.”

The application’s début looked like the first thawing in a relation that’s turned bitter cold in the wake of Android’s rise to the top of the smartphone operating system food chain. While Google does release most of its experiences for iPhone and iPad users, the company has made no qualms about publicly declaring that it would not be making any of its services available on any of Microsoft’s platforms. 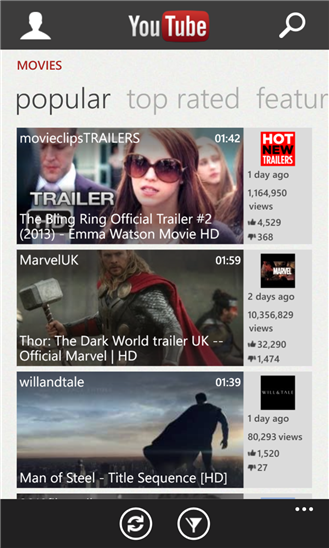 YouTube for Windows Phone has been blocked by Google once again.

The industry consensus has been that, rather than this being a calculation based on Windows Phone’s market share, by withholding its applications, Google is seeking to undercut its most direct competitor. Since Apple creates its own hardware and software combination iOS isn’t a huge threat to Google. However, Windows Phone can be used by any manufacturer who meets Microsoft’s guidelines and pays a licensing fee.

Company representatives from Google also insisted that it disabled the application because it valued its “broad developer community and therefore ask[s] everyone to adhere to the same guidelines,” however that’s not entirely accurate. While Google singled out Microsoft’s in-house YouTube app for violating its Terms of Service in relations to not offering advertisements, Windows Phone has a ton of un-official YouTube application that do that.

These apps also rely on the same Internet Explorer core to deliver their experiences. In a statement following Google’s, Microsoft says that it will continue to work with Google to get the YouTube app for Windows Phone operating again, however it didn’t offer a timetable for when that might happen.

In a frank statement made this afternoon Microsoft has confirmed that Google is blocking the YouTube application it redesigned at Google’s behest. It also details Google’s exact objections to YouTube on Windows Phone saying that, Google wanted into to transition the application over to HTML5 in a way that it knew was completely impossible and that neither the Android or iPhone apps were capable of either. It also adds that Google still feels that YouTube on Windows Phone isn’t adhering to it’s ad policy, with Microsoft saying that if Google would provide them with whatever metadata information the iPhone and Android apps use, it would be more than happy to add the functionality at it’s own expense.

The statement then closes with a paragraph declaring Microsoft’s position in no uncertain terms saying,

“We think it’s clear that Google just doesn’t want Windows Phone users to have the same experience as Android and Apple users, and that their objections are nothing other than excuses. Nonetheless, we are committed to giving our users the experience they deserve, and are happy to work with Google to solve any legitimate concerns they may have. In the meantime, we once again request that Google stop blocking our YouTube app.”