What happened to the rumored Surface Mini? Remember a rumored, unannounced product is just that: a rumored unannounced product. That said, there were quite a few signs that Microsoft was heading to a Surface Mini announcement today, May 20th, perhaps alongside a Surface Pro 3. Well, the Surface Pro 3 rolled out, but the Surface Mini was nowhere to be found. Curious? You bet. Did Microsoft successfully execute a head fake, or did it decide to kill the rumored device? Or is Microsoft just holding off until the timing might be a little better? 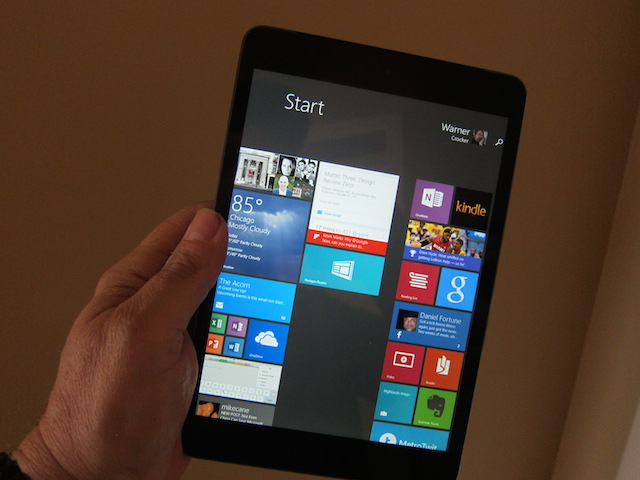 One of the more glaring details that seemed (I stress “seemed”) to suggest today’s event was going to feature the launch of a Surface Mini was Microsoft’s invitation to the press for “a small gathering” in New York City for a Surface event. That invitation was delivered a few weeks ago. The semiotics surrounding the word “small” kicked already existing rumors into high gear. In fact there has been talk of a smaller 7 or 8 inch Surface around since last fall, with some speculating that a Surface Mini might make a debut last holiday season. That obviously didn’t happen.

According to Bloomberg, who is quoting unnamed sources, this year’s rumored Surface Mini was indeed ready to go. But new Microsoft CEO Satya Nadella and once again Microsoft employee Stephen Elop decided that the Mini wasn’t different enough from smaller Windows 8.1 tablets from Dell, Lenovo, Toshiba and others that were already on the market; and that it probably wouldn’t be a success. So, Microsoft pulled all references to the Surface Mini from the presentation. While some of those smaller Windows 8.1 tablets have gotten decent if not glowing reviews, they aren’t really setting the world on fire with sales, so perhaps it wasn’t a fear of competing as much as it was a lack of faith in the platform.

Microsoft exec, Panos Panay, who introduced the Surface Pro 3 today told Bloomberg after the announcement event that Microsoft was still working on smaller devices, but gave no specifics beyond that statement.

The Surface Mini was said to run on a Qualcomm chipset using ARM architecture and most anticipated that this meant we’d see the Surface Mini sporting the latest version of Windows RT. Windows RT runs on the ARM based Surface RT and Surface 2 with processors from Nvidia. Qualcomm may still come into play somewhere down the road.

Noted Microsoft observer Mary Jo Foley set the rumor mill a-churning when she first indicated that her sources were talking about the Surface Mini earlier this month. Later rumors also seemed to bolster Foley’s reporting and included mentions of a cover that included a kickstand for the smaller device. In fact there was a Surface Mini cover spotted on Amazon with a target date of May 18, but that later turned out to be somewhat of a placeholder and not a real thing.

Scratching her head as much as other Microsoft watchers over the lack of an announcement, Foley speculates that one of the decision points may have to do with work on Windows 9, codenamed “Threshold.”

Other speculation is that Microsoft may be waiting for the touch-based version of Office, which is rumored for this fall. There is some credence to that theory in that the current version of Office 2013 that runs on the Surface RT platform has very small targets that are not conducive for touch operation. That said, do note that the Surface Pro 3 was introduced today with a new pen and digitizer technology from NTrig that allows some new interaction with the pen, such as clicking on the eraser end to turn the Tablet on and open OneNote.

That follows earlier speculation that the Surface Mini and its pen would be tied closely to OneNote in ways that we haven’t seen OneNote used necessarily in the past.

Adding my own personal speculation to the mix, it appears Microsoft has decided that tablets need to be all things to all people, especially those who want to work with Office products and other traditional software tools. A smaller 7 or 8 inch Tablet doesn’t fit that story that Microsoft pushed so aggressively during the launch of the Surface Pro 3 today. In fact, the more I think about this, we may see Microsoft completely conceding ground on tablets that aren’t laptops first.

The only thing we know for sure is that there is no Surface Mini from Microsoft at the moment. Will there be one in the future? We will stay tuned if you will to find out.