Did the Entry-Level Samsung Galaxy Grand Phablet Just Get Benchmarked?

With the success of larger screen devices such as the Galaxy Note and the Galaxy Note II, Samsung may be pushing into the entry-level space with the same phablet form factor. It looks like the leaked Samsung Galaxy Grand phablet, an entry-level device with specs such as a lower resolution WVGA display spread out over a 5-inch screen, may have just gotten benchmarked using the Nenamark benchmarking utility. 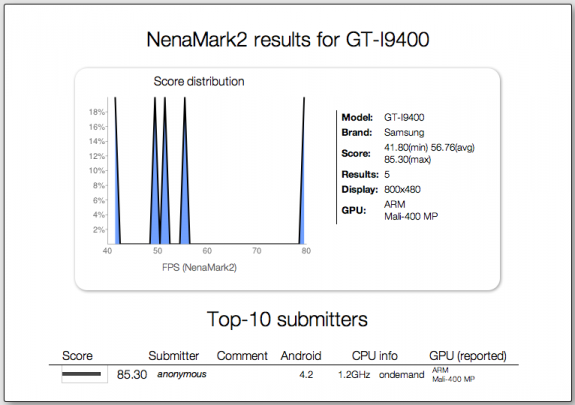 The device shown on the benchmarking utility has the model number of GT-I9400, which some sites initially speculated to be the next-generation Samsung Galaxy S IV smartphone, the successor to today’s flagship Galaxy S III device, as that phone is also rumored to have a 5-inch display. However, inspection of the screen resolution suggests that at least the GT-I9400 won’t be making flagship status as Samsung would want to aim with maintaining at least the current 720p HD display resolution or move up to a full HD 1080p screen resolution to match recent competitor devices, like the HTC Droid DNA.

The device will be running Android 4.2 so at least it would debut with a current Android operating system. It will have an ARM processor with a clock speed of 1.2 GHz and will be coupled with an ARM Mali 400 graphics unit.

The Galaxy Grand is also known by its codename of Baffin and thus far, Samsung has not announced the phone so there’s little information about the device.

It looks like Samsung isn’t just pushing the screen sizes up for its high end devices, like the Galaxy Note II and Galaxy S III, but will be doing the same thing for its more modestly priced entry-level offerings if rumors of the Galaxy Grand hold true.

The device is expected to be akin to the 5-inch Samsung Galaxy Player, which is a media player that competes in the same space as the iPod Touch, but couple the device with a better processor and a more modern OS.