Did you catch the HP TouchPad on the Grammys? Me neither

So apparently HP tried to use the Grammy awards as the launch point for their new “Everybody On” campaign. It included a commercial that is being widely reviled and the HP TouchPad shown in use before commercial breaks. Effective? Survey says “no”. 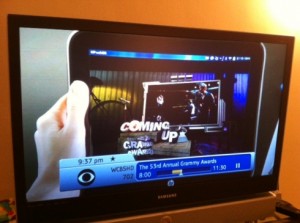 Via Out 'N Front

Not only have people crapped on the commercial (below) again and again and again, but it seems almost no one is talking about the HP TouchPad being used at the show. I’ve found chatter on only a couple of blogs, and I would never have known to look if I wasn’t pointed to one of them, Out ‘N Front, by reader wellthen. Between the tablet folks I follow on Twitter, including one probably insane WebOS fan, and the ongoing search I have on tablet news, I hadn’t seen anything on this topic.

I take some blame for not watching the show. Had I caught it, I would have seen the TouchPad and recorded the show to get action shots and screen grabs. But looking for screen grabs and chatter on the web, I see there’s not a lot of people on to “Everybody On”.

BTW, I know I’ve been cutting HP a lot of slack for their blatantly obvious iPad-based design, but a debut to mainstream audiences on the Grammys just as Stephen Colbert did (to far greater effect) with the iPad? Come on, that just validates the cries of “rip-off”. Getting worried that the old “good tablet, bad marketing” argument is about to return with a vengeance.