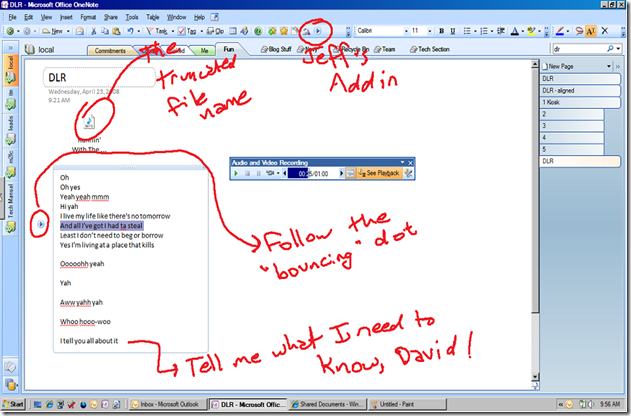 Daniel Escapa’s OneNote Blog has been quiet for quite some time, but he’s back and telling us the hiatus from blogging has been because the OneNote team has been very busy working on the next version. That’s good to hear and of course, we’d love to hear more about this fantastic piece of software that Microsoft still wants to keep secret, even in its current iteration.

But Daniel doesn’t just leave us with a “hey, we’re still here” post. He links to two other blogs from OneNote team members worth following.

First up is Jeff Cardon and his OneNote Tips and Tricks. While it looks like Jeff hasn’t posted in awhile, there is some great info there.

More current is a blog we’ve mentioned before by John Guinn called OneNote Testing. John has a recent post listing the powertoys or add-ins that were released in 2008. Oh, yeah, and that Karaoke reference in the title? Apparently there’s a nothing to install, nothing to set up OneNote Karaoke Machine. Who knew?

In any event, you probably want to check out both John and Jeff’s blogs, and leave a comment for Dan and let him know we’d like to hear more sooner rather than later.