Oyster, the service that allows users to rent books for a flat monthly fee, is now available on Apple’s iPad.

Oyster formally announced the updated version of its iOS application this week. Users can download the new application from the iTunes App Store already. It comes complete with a darker design that doesn’t rely so much on the white backgrounds as the iPhone version of the application that launched last month.

The company says that it’s also added more immersive imagery thanks to the iPad’s bigger screen. It’s Oyster’s hope that the bigger cover displays and backgrounds will help it replicate the feeling users get when shopping for books at their local Barnes & Noble.

Finally, the company has also enhanced the service’s browsing experience. The application and service now allow users to personalize different genres and get recommendations for future reads based on their past reading history. It’s also added more editorial content and spotlights to the service. In theory, this editorial content collects different titles based on interests and other promotions. It’s the same kind of editorial content that iPhone and iPad users have come to expect from Apple’s iTunes Store. 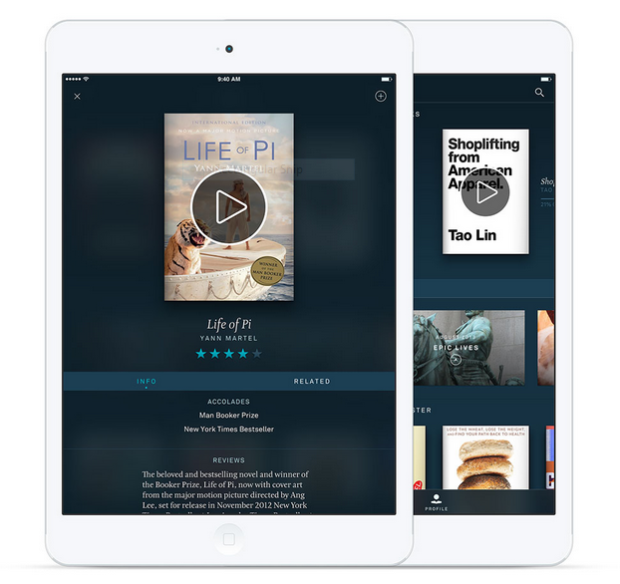 Oyster says users no longer need an invitation before signing up for the service as well. Effective immediately, anyone can actually join the service and begin downloading as many of the service’s 100,000 titles they want for just $9.95 a month. Those nervous about committing to the service can test it out with a free month-long trial.

All told, the company seems to be borrowing much of its approach from Netflix’s attempts to revolutionize the way users consume video content. While digital library solutions like Overdrive have existed for years, using them has always been a bit cumbersome. For example, Overdrive requires that users actually check-in and check-out books digitally, despite the fact that it’s a digital service that doesn’t actually have physical books.

Oyster is making progress, however if it wants to succeed it’ll need to begin quickly building its distribution network outside of Apple’s ecosystem. The company doesn’t offer any apps for Android tablets or smartphones, however it is hiring an Android engineer according to the company’s job openings page.