While visiting Paris with his family, Steve Mann, was physically assaulted by three individuals, several of which appear to be McDonald’s employees for wearing digital eye glasses in the store.

Updated with 2nd response from McDonald’s

Steve Mann invented the EyeTap Digital Eye Glass to help people see better, and according to his account he’s worn some sort of computer vision system for the last 34 years.

When Mann and his family traveled to Paris he wore the vision system, which looks like an early version of Google’s Project Glass. The vision system can “help many people see better, and improve the quality of their lives through Augmediated Reality.” The system looks like Steve Mann invented Google Project Glass years ago, at least the hardware. While Project Glass focuses on adding information and taking videos and photos the Eye Tap system might diminish reality to eliver better vision to a vision impaired wearer. 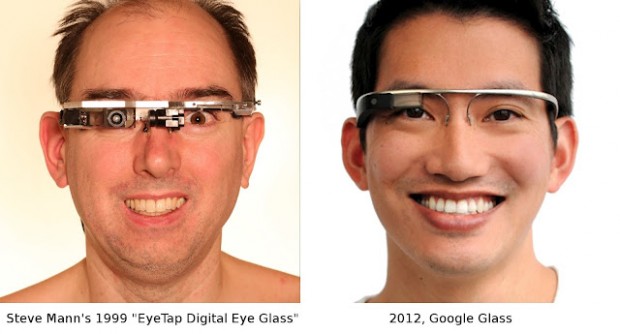 The Eye Tap system on the left is a precursor to Google Project Glass and wearable computing.

Mann brought along a note from his doctor and documentation in case he was questioned about his computer vision system while visiting museums and landmarks throughout Paris. Mann states that he did no have any trouble while visiting these locations, which he points out are guarded by police or military members, but when his family went to McDonalds on 140, Avenue Champs Elysees, Paris, France he was assaulted for wearing the digital eye glasses.

Before ordering Mann says he was required to present his papers to a McDonald’s employee. The employee accepted this documentation and took the family’s order. After sitting down to eat, several purported McDonald’s employees approached.

Subsequently another person within McDonalds physically assaulted me, while I was in McDonand’s, eating my McDonand’s Ranch Wrap that I had just purchased at this McDonald’s. He angrily grabbed my eyeglass, and tried to pull it off my head. The eyeglass is permanently attached and does not come off my skull without special tools.

After all three of them reviewed this material, and deliberated on it for some time, Perpetrator 2 angrily crumpled and ripped up the letter from my doctor. My other documentation was also destroyed by Perpetrator 1.

In attempting to remove the vision aid system, the attacker damaged the EyeTap device, which kept the last images in memory, essentially capturing photos of the claimed employees in action.

Steve Mann reports that he has received no assistance from the Embassy, Consulate, police or McDonalds and writes that he is not looking for an award, but just wants his “Glass fixed”, the glasses he uses and has used on a daily basis for over 30 years.

At least one other traveler was physically accosted by a McDonalds’s employee in Paris as in Spring of 2011, for taking a photo of a menu. McDonald’s describes that incident as an “unfortunate misunderstanding.”

The prevalence of wearable technology capable of recording our surrounding raises a number issues. Issues that we’ll need to work out as systems that aid vision or connect to our social circles become more prevalent. Here’s an example of what a wearer might see with the EyeTap system.

McDonald’s did not repsond to a request for comment at the time of publishing, but responded to a Twitter users that, “We take the claims very seriously, are in process of gathering info & ask for patience until all facts are known.”

“We strive to provide a welcoming and enjoyable experience for our customers when they visit our restaurants. We take the claims and feedback of our customers very seriously. We are in the process of gathering information about this situation and we ask for patience until all of the facts are known.”

“We share the concern regarding Dr. Mann’s account of his July 1 visit to a McDonald’s in Paris.  McDonald’s France was made aware of Dr. Mann’s complaints on July 16, and immediately launched a thorough investigation. The McDonald’s France team has contacted Dr. Mann and is awaiting further information from him.

In addition, several staff members involved have been interviewed individually,  and all independently and consistently expressed that their interaction with Dr. Mann was polite and did not involve a physical altercation.  Our crew members and restaurant security staff have informed us that they did not damage any of Mr. Mann’s personal possessions.

While we continue to learn more about the situation, we are hearing from customers who have questions about what happened.  We urge everyone not to speculate or jump to conclusions before all the facts are known.  Our goal is to provide a welcoming environment and stellar service to McDonald’s customers around the world.”