This weekend’s discussions here at GBM and elsewhere about Steven Sinfosky’s comments in a recent post using the Tablet PC bits as an example of components of Windows that can be turned off have generated quite a bit of passion. In the big picture that is a great thing. Quite a few folks weighed in with comments to this post (including Mr. Sinofsky). Loren Heiny’s intital response has also generated a lot of good discussion, as has James Kendrick’s post about the topic.

Some see this as much ado about nothing. Others (like myself) see this as, if nothing else, a troublesome comment by Sinfosky given his leadership role. I think the difference of opinion here is both healthy and productive as it certainly is putting a discussion of Tablet PCs front and center again, both here, and hopefully at Microsoft.

A couple of other interesting notes here as the discussion moves along. James Kendrick posted a link to Twelve unnecessary Vista features to disable, this morning. Note that the Tablet PC bits are included in that list of twelve. Also note that some commentors to jk’s post are poo-pooing this specific list for a variety of reasons.

Loren Heiny has illustrated his thoughts further, as only a Tableteer can, by taking Ink to screen with this cartoon. 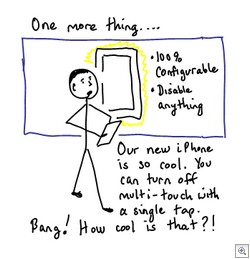 As the discussion continues let’s keep some historical perspective in mind.

Mr. Sinofsky’s comments here and elsewhere in the discussion can certainly taken at face value that some might be reading more into them than he intended. That said, I think those of us who have been around through the rocky evolution of Tablet PCs and the rough acceptance path it has had within Microsoft, even with Bill Gates as a champion, are always leery of any conversation starter about Tablet PCs and how it is connected (or not) to the Windows ecosystem.