Disney has announced that as of today, the company will be rolling out Watch ABC, an iOS and Kindle Fire application that will allow users to stream content over the devices as it airs in real-time.

According to today’s press release, WATCH ABC will be made available via an “open access preview” to users in New York City and Philadelphia residents. As expected, users will be required to confirm that they have a cable or satellite subscription before being allowed to view any of the application’s live content.

The company is noting that the live TV streaming service will be rolling out to the Los Angeles, Chicago, San Francisco, Houston, Raleigh-Durham and Fresno markets this summer. At the time this Disney is only providing live streaming in markets where the local ABC station is already owned by The Walt Disney Company, ABC’s parent company, or has already signed an agreement with Disney. 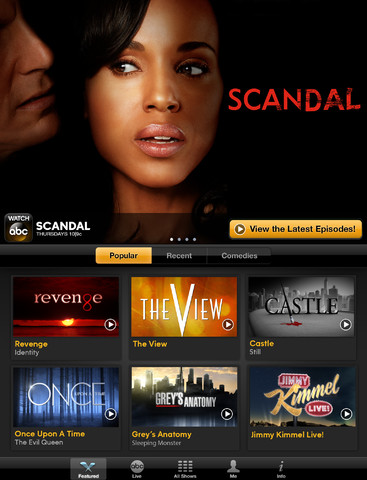 So far Hearst Television has also announced that it will make the service available to all of the markets it serves eventually. These markets include Boston, Pittsburgh, Kansas City and Milwaukee.

The press release also makes no mention of any upcoming support for Windows Phone or BlackBerry 10 devices, though the ABC Player app is currently available for Microsoft’s Windows RT and Windows 8 users.

As of today ABC is the only broadcast network to offer their content on mobile devices as it airs. Rivals CBS, PBS, The CW, and NBC only offer the content through mobile devices via their respective websites and applications the day after they air.