It has been weeks since Disney Infinity 3.0 arrived on store shelves for the Xbox One, PS4 and older video game consoles. Now its smartphone and tablet owner’s turn to get their hands on the latest entry in the toys-to-life franchise. The Disney Infinity 3.0 release date for iPhone and iPad users has finally arrived. 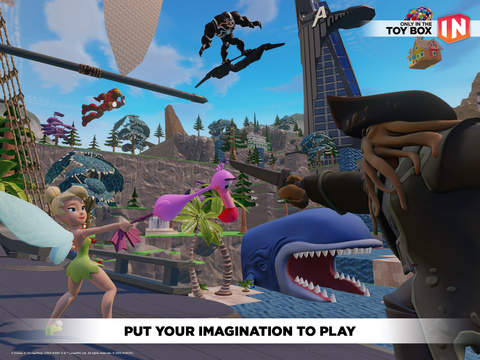 Disney Infinity: Toy Box 3.0 for iPhone and iPad focuses on new Toy Box features and enhancements. This update brings with it all the characters that were added to the living room version too. That includes Star Wars characters like Ahsoka Tano and Anakin Skywalker. Smartly, Disney has left all the characters of the first two versions of the game in.

The game is a free download. Users get to try 3 different characters absolutely free every week. If they choose to purchase one they like they can do that too. Since physical characters for the main version of the game come with web codes, users can sync their favorites over to the iPad and iPhone version instead of purchasing those same figures again.

The Toy Box hub that’s featured in this game is taken straight out of the main version. The Toy Box Hub is a 3D space that represents different experiences in the game. Different worlds radiate out from the center of the Toy Box Hub, making it easy for players to find the experience they’d looking for. There’s one dedicated to farming and enhancing sidekicks. A Star Wars themed area has races. An entire area dedicated to combat is inspired by The Nightmare Before Christmas. As you complete challenges in the Toy Box and take on enemies you earn sparks that can be used to purchase more toys and enhance your house in Disney Infinity: Toy Box 3.0.

Taking your figures anywhere you are playing is one thing. Being able to take the things you create with you on any device is another. Syncing is especially important as Toy Box is creation tool for new content too. Toy Box Anywhere allows Disney Infinity: Toy Box 3.0 players to sync what they create from the different versions of the game. Other notable improvements include Daily Challenges for playing with other and better controls for users who found the previous games a bit too hard to use.

Depending on what device users have, that’s where the good news ends. Disney Infinity: Toy Box 3.0 for iPhone and iPad heavily relies on Apple’s Metal tools for developers to get the best performance. It’s recommended that no one but people who own at least an iPhone 5 or an iPad 2 download it. What’s more, anyone with a 16GB iPhone or an iPad already starved for more storage might want to find another game to play. Disney Infinity: Toy Box 3.0 for iPhone and iPad requires 2GB of storage to install on its own.

There’s even worse news for owners of devices running Android and Windows. Disney Infinity: Toy Box 3.0 isn’t yet available in Microsoft’s Windows Store or the Google Play Store. Disney hasn’t provided any information about when those versions of the game will arrive. It is worth noting that past games in the franchise are available on those platforms now. It’s almost a sure bet that they’ll get their own versions in the not too distant future.