Families love Disney and Disney loves families. You won’t find too many households that don’t have a library of Disney flicks floating around in disk format somewhere. And increasingly you’ll find families are accumulating a digital library of Disney titles as well. Until now you’ve had to build those libraries through iTunes or other sources. But now Disney is launching a new streaming service via an iOS App called Disney Movies Anywhere that will allow you to build your library of favorites from the studio of Mickey Mouse, Pixar, and Marvel directly from the App and view them on any device. 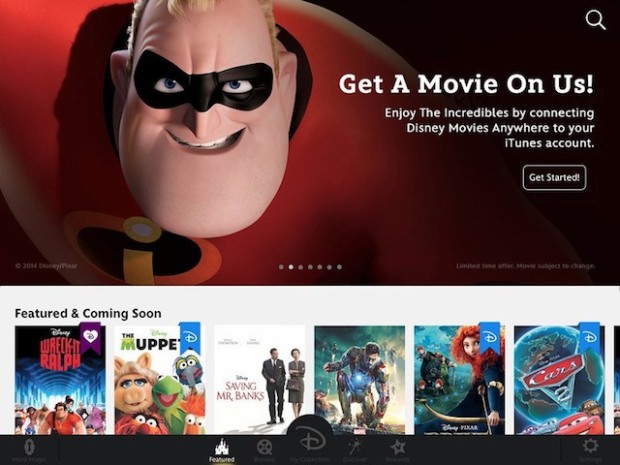 The trick here is that there is a tight integration with iTunes that doesn’t require you to make the purchase through the iTunes store per se. Instead Disney Movies Anywhere asks for your iTunes data (you know, your credit card info) and the billing still goes through iTunes. But you’re seeing and storing your collection in the Disney Movies Anywhere App instead of another video App like Apple’s Videos. Essentially you are creating a digital locker of your Disney content that is a one stop shop and view portal. Disney content previously purchased via iTunes will show up in the App once you’ve set up an account. If you are a movie buff that likes to purchase a disk based version of a movie that comes with access to a digital download you can redeem that download through the Disney Movies Anywhere App. Movies can be streamed or downloaded for offline viewing. Other “extras” content is available as well. Over 400 titles are available at launch.

Parents will be able to use the MPAA ratings for content to control which content their children can view. For example content with a rating of PG-13 could be blocked.

To catch your eye for the new initiative Disney is offering a free copy of The Incredibles to lure you in. And lure you in is probably the game that is being played here. While payment will go through Apple’s iTunes, you need to register and set up an account with Disney to take advantage of the App, which gives Disney the opportunity to build data on customers who are purchasing their titles. Other carrots include Disney Rewards points for each digital transaction. Disney says that the App will also be available on Apple TV via iCloud or AirPlay.

Disney plans to make this more than just a place to grab movies by building out interactive content around the titles it offers. Disney is also looking to add other retail partners to build out the ecosystem in the future.

As iTunes as become a source for video content for many, this initiative raises an interesting question for the future. Will Apple let other studios and content providers create a similar arrangement creating their own portals for content with purchases managed through the iTunes backend? Apple has been close with Disney since Steve Jobs sold Pixar to the company in 2007. Jobs became Disney’s largest share holder through the deal and was on Disney’s Board of Directors. So, this may be a one off or the beginning of a broader play by Apple. Disney Movies Anywhere is built on top of proprietary Disney technology known as KeyChest, which many believe is the reason that Apple and Disney have not joined the Ultraviolet system some studios are using to allow for the purchasing and downloading of digital content. KeyChest is designed so that any studio or digital content store could take advantage of the system to offer their content.