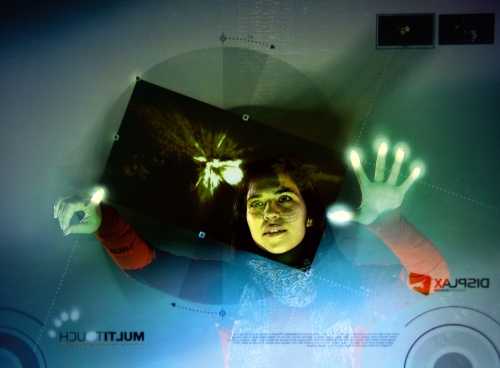 Wired has a nice write-up of a new technology offering from Displax that can turn many surfaces, such as LCD displays and tabletops, into multi-touch input devices.

Displax, a Portugal-based company promises to turn any surface–flat or curved–into a touch sensitive display. The company has created a thinner-than-paper polymer film that can be stuck on glass, plastic or wood to turn it into an interactive input device.

Using a grid of nanowires embedded in the film, it’s a capacitive touch system that can detect up to 16 points of contact with more promised in the future. In addition to detecting fingers, it can also tell when someone blows on it, though I’m not sure how the capacitive touch enables that.

The film connects via USB and includes its own firmware, driver, and control panel for user calibration and settings. Sounds a bit odd to have a film on a monitor with a USB cord hanging from it, but presumably that’s just if it’s used as an add-on. As an integrated component, it should be more elegant.

In addition to being a simple way to add multi-touch to a monitor, I think it would be interesting to turn other surfaces into multi-touch control panels, like a spot on the desk or, as others have suggested, the back of a handheld device. Personally, I’d use it to turn a bamboo cutting board into the equivalent of a Wacom Bamboo Touch.