Can an iPad 2 lover ditch Apple’s awesome tablet in favor of the Kindle Fire for a whole day? In a word, almost.

I decided to give it a try. The Wednesday after the Fire shipped, I left my iPad at home for the day – or at least most of it.

That morning I sat in my office where I began the day doing a little reading. Being an Amazon product, reading books is where the Fire shines. I’m used to reading on a backlit glossy screen, having done so for more than a year and a half on the iPad and iPad 2. I like the Fire’s crisp text despite not having as high a resolution screen as the iPhone 4S. It’s bright and looks great. I haven’t tried out any magazines yet, so I can’t say whether it will be as bad as it was for Josh Smith. 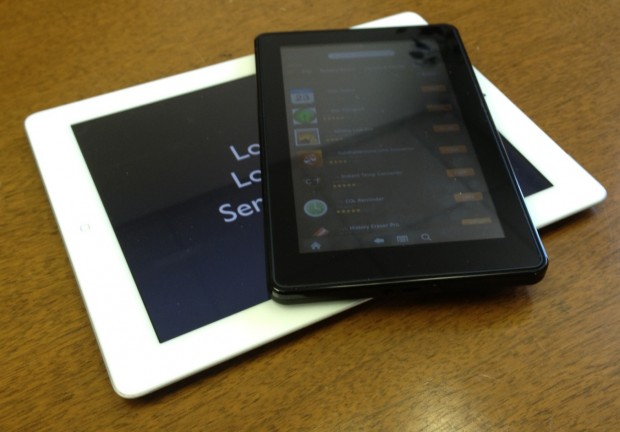 While I worked on my computer I listened to some audio from my Amazon Cloud Drive through the Music tab on the main screen. The built-in speakers don’t wow you, but they’re decent. With a set of headphones or external speakers, the Fire functions well as a music device while streaming albums from your cloud drive. You can also download the music for those times when you’re away from Wi-Fi. Audible works well too. I’m listening to 1776 by David McCullough.

As a pastor, I use a few Bible apps on my iPad for reading and study. Fortunately both of the my favorites are available on the Fire. Unfortunately, one has to be side-loaded from their website and the other has bugs in the App Store version so you also have to side load a beta. The first one should be in the app store but it didn’t show up, despite promises from the company that they were notified it would be there.

The experience with apps not working or being available is a common problem for new devices like this. I still have some iPad apps that don’t work on iOS 5 well. I’ll give it a week or so before I get too critical. However, like all other Android tablets, there just aren’t the same number and quality of apps available as there are for the iPad.

Fortunately, some of the right apps are available. I finally downloaded Netflix and Hulu Plus and tested them out again today. The 7″ screen looks nice while viewing video. Plus you have access to the Amazon video library, something you can’t do on the iPad. You do have access to iTunes videos on the iPad, something you can’t view on the Fire. So it’s a wash. I do miss iTunes University videos – an awesome iTunes collection of learning videos from colleges and universities.

One thing I absolutely could not do on my Fire forced me to grab the iPad – a Keynote presentation! Even if you can view presentations on the Fire using static pictures or an app like Office Pro HD, you can’t hook it up to a video projector or TV. My iPad-ditch day was a Wednesday, the day I teach a class at my church at night. I use my iPad for presenting each week. I could have used my MacBook, but the iPad works so well along with the Apple TV I installed on the projector.

At the end of the day, I like to take my iPad with me to bed and wind down by playing a game as my wife grades papers. It’s relaxing. My favorite iPad game, Lux DLX 2, isn’t available on the Fire. But I do have a bunch of games purchased on my ASUS Eee Pad Transformer and the two Android phones I’ve used before the iPhone 4S. Random Mahjongg Pro helped me settle down as I watched the news.

Almost but Not Quite

I was almost able to make it a full day without my iPad. I literally could have, but I don’t want to have to sacrifice just to use the Fire. The question will be, can the Fire do anything the iPad can’t? Maybe a subject for another post.