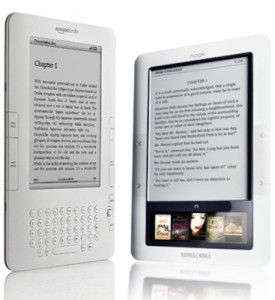 What's Next for the eReader Market?

Two years ago, Amazon was on top of the world. Their Kindle device had just released a second version and was sweeping the nation’s media circuit with stories about glare free reading, epic battery life, and the ability to carry thousands of books.

When the iPad was announced, one of the most discussed features was iBooks and the ability to read eBooks on a device that was, as of yet, not well defined to the average consumer. Today, the intro-level tablet PC market that Apple blew open is growing at rapid speed, overshadowing the Kindle and all of its eReader brethren together in 2010.

So, it begs the question – does anyone need an eReader in the age of multi-tasking, high power devices that cost as little as $500. It definitely helped when Amazon lowered the price of its 7” Kindle to only $139, but I can’t help but wonder if anyone who’s ever held an iPad or Xoom furrows their brow a little when they pick up a Kindle.

Technically speaking, it’s a better device for pure reading – more battery life, better performance outdoors, and free 3G, plus a much lighter chassis that makes it easier to hold it with one hand on a train or bus.

But, the problem to me is this – consumers are being groomed to expect their devices to a LOT of things, even the low cost ones. With Android and iOS phones costing less than $100 on contract and tablet computers providing a huge list of features to draw from, an eReader – even at $139 – seems overpriced.

Barnes and Noble is hinting at plans to make their Nook Color – the second generation of their popular eReader – run Android Apps. The device can already boot up earlier editions of Android with limited support, but if the device, either in its current iteration or in a new update later this year, can take on the tablet market directly – it will mark a good middle-ground for users who want a dedicated eReader…that isn’t 100% dedicated to reading.

This is the age we live in – our devices need to be as versatile and varied as we are and while technically speaking, eReaders are better for actually reading, most people would rather carry one device that can do all of their mobile entertainment tasks, plus possibly some work.

What do you think? Can the eReader market flourish in its current incarnation or do Amazon, Barnes and Noble and Sony need to rethink their approach to the technology? Are they making a mistake by integrating Android or will it open up new possibilities for eReaders and tablets alike?