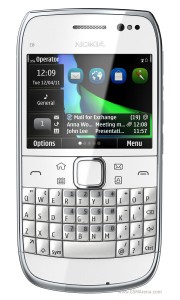 The Nokia E6 is Nokia’s first smartphone with a front-facing QWERTY keyboard that combines a touchscreen and the Symbian^3  operating system, and that device may have the best display of any modern smartphone. According to testing by GSM Arena, the Nokia E6’s display is the most pixel-dense display on the market as well as having the most brightness.

In the brightness category, the LG Optimus Black is the current title-holder boasting 700 nits of brightness. However, the Nokia E6 has just de-throwned the Optimus Black in that department as well.

If you’re interested in the Nokia E6, you can read the full GSM Arena review. The device comes pre-loaded with the Symbian Anna software update out of the box.