Since the days of Microsoft’s Tablet PCs there have been debates about Tablet PCs and keyboards. Many die-hard Tableteers insisted that the Slate (without a keyboard) was the key to the future of Tablet PCs. Many, like myself, preferred a convertible or hybrid Tablet PC because the keyboard provided options to use the Tablet PC as a laptop. Those debates don’t have the same fire today with modern Tablets. Microsoft is pushing keyboards with its Surface Tablet, having created two pretty nifty keyboard covers. But then accessory makers have been selling keyboards for the iPad in great numbers for awhile, and the consensus seems to be that if you want to do any real work on a modern day Tablet you need a keyboard. My favorite for the iPad is the Logitech Ultrathin Keyboard Cover. (You can read a number of GBM reviews of keyboards here.) In fact, if you remember when Apple unveiled the first iPad, it was pushing its Wireless Keyboard dock as an accessory at the time. Back then, I thought Apple was hedging its bets for consumers who might be afraid to go touch only.

Like everything else with Tablets, “needing a keyboard” depends on what you you do with the device. However, If you’re choosing a Microsoft Surface Tablet, in my opinion, you absolutely need a keyboard. More on that later. If you’re using another Tablet and want to write you’ll probably end up wanting a keyboard. There are certainly many options out there for you to choose from. Keyboard cases, roll up keyboards, keyboards that stick to your Tablet, projected keyboards, the list goes on. In fact, you can use quite a few existing keyboards with the Surface RT and not rely on either of the new keyboards designed for the RT. That said, these keyboards are designed with special keys to take advantage of some the Surface RT features and they do double as a screen cover. 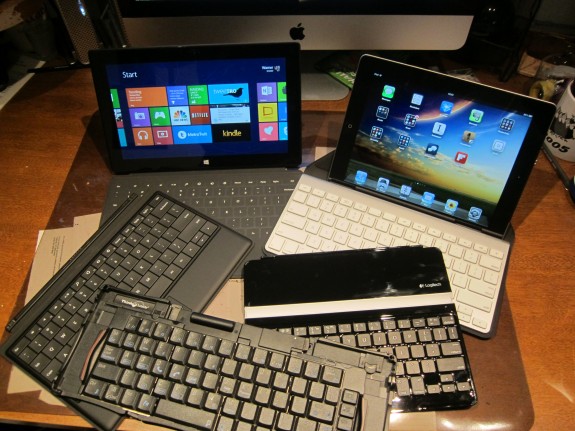 I picked up both the Type and Touch keyboard covers when I bought the Surface RT. I was eager to see what Microsoft had created with the accessory. My preconceptions were that the Touch keyboard would be interesting, but I would probably settle on the Type keyboard. The Touch keyboard has no moving or mechanical keys. It relies on capacitive touch technology. The Type keyboard is mechanical and therefore feels more familiar to anyone who has been pressing keys up and down, which I think is most of us. There is not a lot of travel to those keys, but they work very well after a short period of adjustment.

Like I said, I thought I’d end up using the Type keyboard more. I’m certainly seeing that choice as a trend among tech bloggers. But as I’ve been using the Surface RT for a little over week, I actually prefer the Touch keyboard. Microsoft warns up front that using the Touch keyboard comes with a learning curve. And it does. In my experience, once I gave into it, the learning curve began to flatten out relatively quickly. I’m able to type as fast as I need to after testing things out for a week on the Touch keyboard. And as I’ve been alternating between the two models there is a sense of relief when I go back to the Touch keyboard. Don’t get me wrong the Type keyboard works like a charm and feels very familiar, but the Touch Keyboard seems to make more sense to me on the Surface RT. There are a couple of reasons for this. 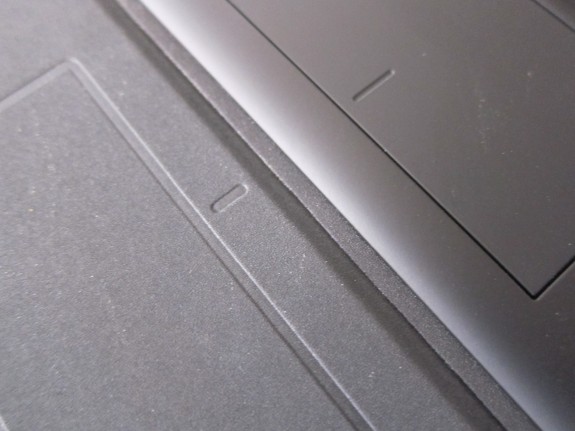 Second, both keyboards serve as screen covers for the Surface RT. Fold them over when you are read to carry the device around and your screen is protected, and the keyboards turn themselves off. That’s a good thing, because the keys are exposed to your fingers when the keyboard is folded over in this position. You don’t get errant key presses because this “turn off the keyboard feature” works well, but I find it very odd when I’m holding the Surface RT with they keyboard in this position because I constantly feel the keys moving under my finger tips. Tablets are tactile things and this tactile sensation just feels wrong to me. 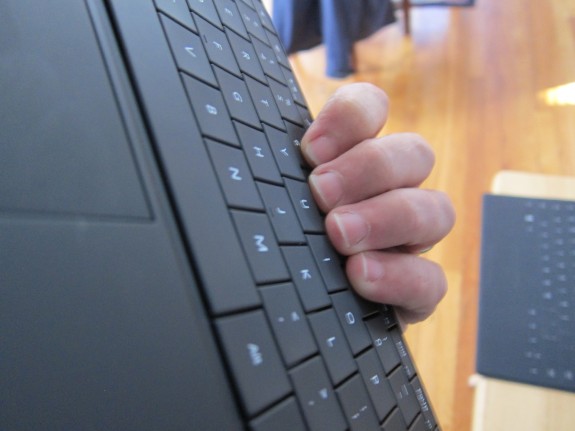 The Type keyboard in the screen cover position

Your mileage may vary. Let me repeat that. Your mileage may vary because what works for me may not work for me. As mentioned earlier I’m seeing the majority of folks who are talking about this preferring the Type keyboard. I think there is comfort in the familiar, especially given that the Surface RT is anything but. I’m equating this to similar reactions to Apple changing the trackpad scrolling direction on its MacBooks. Many quickly turned this new feature off because it felt odd, and well, different. I kept with it, and within a day or two it actually felt more natural to me.

Note that both of the black keyboard models come with a wool-like textured backing. The colored models of the Touch keyboard do not. I haven’t had one of those keyboards in my hand, but my understanding is that they have the same polyurethane like treatment that the front of those keyboards do. I was skeptical about this wool-like textured backing when I unpacked the keyboards. I figured they would be magnets for picking up any piece of dust or gunk laying on my desk or whatever surface I had the device on. That proved true, but a quick brush of the hand removes things quickly, and I don’t see this an a problem going forward. 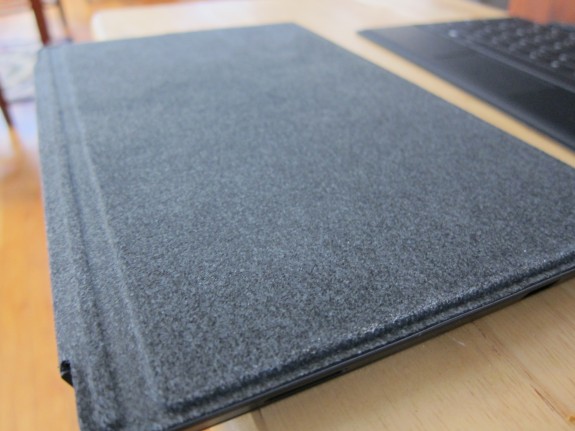 Again, I haven’t used one of the colored Touch keyboards, but the texture of the actual typing surface on the Touch model I have has a slightly rough texture to it that I find helps me in my typing. The Type keyboard’s texture feels like the plastic that it is, and is also creates a great fingerprint magnet. Both keyboards clean off with a damp wipe or two.

The reason you do need a keyboard for the Surface RT is actually one of the problems I, like so many, have with the Surface RT. I spoke about this in my review of the Surface RT. Yes, you can use Office (and some other Windows utilities) on a Windows 7-like desktop on the Surface RT. (You can not use x86 Windows Apps.) The problem here is none of these “desktop” Apps have been designed with touch in mind. The targets for opening, closing, and manipulating things on the screen are just too small for touch and you need some other method to make things work. Yes, you could hook up a mouse, but I find the trackpad to be more than sufficient to handle this puzzling, and to some degree insulting, UI design choice that Microsoft chose for its first Tablet.

In the end, it is easy to see why Microsoft focused so much on the new keyboard options for the Surface RT. You have to have one to really take advantage of what the Surface RT offers. While other Tablets don’t necessarily require a keyboard, increasingly, I think those who want to use Tablets for work will continue to find keyboard solutions to make getting work done easier on these very personal device. Thankfully there are a large range of choices from you to choose from.