Dolphin Browser for the iPhone is a great alternative to Mobile Safari, and with the new Sonar feature iPhone owners have another reason to try this iPhone browser.

Dolphin Browser is better than ever with Sonar, a voice control feature that lets users browse by voice. 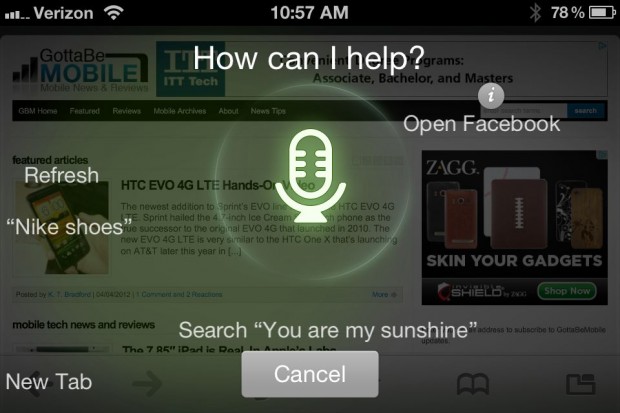 Sonar debuted on Android last month as a free upgrade. Sonar is incredibly useful on Android, addressing limitations of the Android interface, making it simple to go to the top of a page without scrolling.

Users activate Sonar  by shaking the iPhone. The Dolphin app will then listen for commands to open specific webpages, take actions in the app and more.

Sonar shines when Dolphin Browser is in full screen mode. App users can say, “open notebooks” and the browser will open notebooks.com in the browser. The Sonar feature also understands commands such as “Switch Tabs” and “scroll down”.

The Dolphin app also understands commands to watch a certain video, showing YouTube results. Opening a new tab is as simple as saying, “new tab” from anywhere in the app.

Sonar performs as advertised on the iPhone, responding to commands quickly and with good accuracy.

Alternative iPhone browsers face a challenge because users cannot set them as a default browser. Despite this challenge, Dolphin is the only alternate browser I keep on my iPhone.

Users who rely on Dolphin Browser on a daily basis will appreciate Sonar, even at 99 cents.

Dolphin Browser is a free download in the iTunes App Store.