As people digest the news that Steve Jobs is stepping down as CEO of Apple, the widespread emotion is one of regret and sadness at the loss of this icon. I don’t see it that way. Yes, Jobs is leaving as CEO, but he’s not leaving the company and he’s not entirely leaving his job.

Some of the words used to describe this big news have been “shocking” and “abrupt.” Let’s step back for a minute. Tim Cook has been acting CEO for the past several months now. That means he’s been doing the job of CEO, acting as CEO, in Jobs’ place. In every way except title, Cook has been the CEO of Apple. Jobs has been transitioning out of the CEO position for months, possibly years since his earlier leave of absence. The news is still big, but it’s not something that’s happened suddenly. 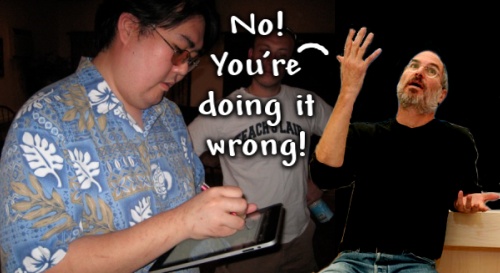 That time I met Steve Jobs at Wayside Theatre. He seemed upset.

In his letter of resignation, Jobs did not ask to leave the company but rather asked to stay on as “Chairman of the Board, director and Apple employee”. Technically, as CEO and board member, Jobs was essentially Apple’s executive chairman. What he’s done now is split that position between executive (CEO) and non-executive (chairman) and kept the latter half.

Another key phrase from his resignation is “Apple employee”. Aside from Bill Campbell, former Apple employee and current Chairman of the Board of Intuit, no one else on Apple’s board has worked within the company. Jobs could have chosen to remain a board member without retaining his status as an Apple employee. Certainly his $1 salary was no incentive to stay. More likely than not, this means he intends to poke his head at the campus whenever he can and be involved in major projects. He will no longer have his hands on every component of every product, but you can bet each new Mac and iPad will carry his nod of approval.

Bottom line, whatever happens to the company, it will happen because Steve Jobs is pulling back, not pulling out. It may have shocked those who thought he’d never leave, but really this move was a long time coming and well-planned. I wish him well in his retirement from the responsibilities of CEO. I only hope he’ll be more mellow roaming the Apple halls as the boss’ boss than as the boss.