This week a new Donald Trump Anonymous video arrived to take the attention momentarily off of the Donald Trump Twitter feed and put it on Trump’s personal information as he continues his march towards the GOP convention.

We first heard that the hacking collective Anonymous planned a Donald Tump hack in December 2015, and with Super Tuesday behind us #OpTrump is now sharing Trump’s personal information in a variety of videos.

Although recent Donald Trump Anonymous videos claimed that the operation would start in April, some members of this widespread group shared a collection of Trump’s personal information already.

The Anonymous video above outlines the war they are waging on Donald Trump. The group outlines where the information is located, but we are not linking directly to it.

What Did Anonymous Leak About Donald Trump? What you need to know about the Donald Trump Anonymous video. Joseph Sohm / Shutterstock.com

The Anonymous Donald Trump hack claims to have leaked Donald Trump’s Social Security Number and cell phone number, but CNN was not able to verify this information.

In addition to that information there are cell phones, home phones, addresses and other personal data for people who are connected to Trump. CNN verified that at least one of the numbers is tied to someone who is connected with Donald Trump.

The Anonymous group is a widespread and far-flung collection of individuals. Anyone can say that they are a part of the group, but there are some rules to follow according to Tech Insider. The roots of the organization trace back to 4chan, an online message board.

The report also outlines the conflict inside the group, as some members think that the Donald Trump hacks go against Trump’s free speech, while others see it as a valid action based on Trump bringing a, “resurgence of racism and unrest.”

The video above walks through what Anonymous is. Although the video is four years old, this is a good introduction to the start of the group.

At this stage there is no major statement on the Donald Trump Twitter account. There is an official statement from a Trump representative who told CNNMoney, “seeking the arrest of the people responsible for attempting to illegally hack Mr. Trump’s accounts and telephone information.” 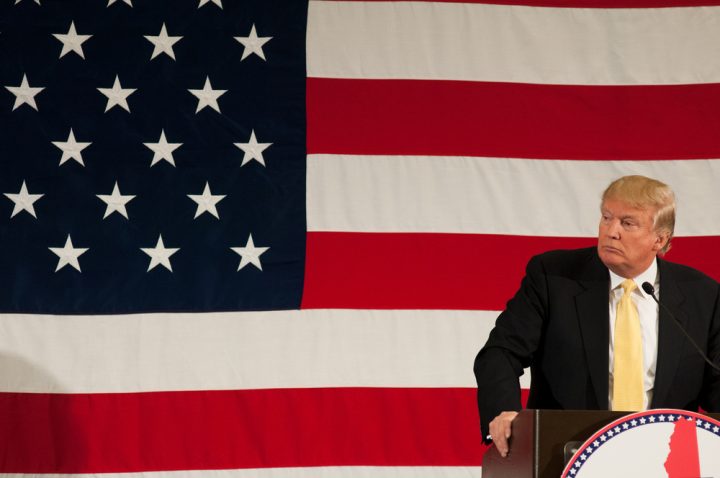 Although Donald Trump’s campaign issued a stern response to the hackers, and are looking for the arrest of individuals involved, Trump is open to creating backdoors that make hacks like this possible.

Speaking in Charleston, S.C. in February Trump addressed the government’s desire for Apple to compromise iPhone security so that the government can access an iPhone in their possession. Trump told the crowd, “We should force them to do it. We should do whatever we have to do.”

I use both iPhone & Samsung. If Apple doesn't give info to authorities on the terrorists I'll only be using Samsung until they give info.

Tim Cook recently responded to this in an interview with Time Magazine. Cook states,

“I haven’t talked to him so I don’t know what he thinks. The way I look at it is, Apple is this great American company that could have only happened here. And we see it as our responsibility to stand up on something like this and speak up for all these people that are thinking what we’re thinking but don’t have the voice.

We don’t see it as our role as the decision maker. We understand Congress sets laws. But we [see] it as our role not to just let it happen. I mean too many times in history has this happened, where the government over reached, did something that in retrospect somebody should have stood up and said ‘Stop.’

We see that this is our moment to stand up and say ‘Stop.’ And force a dialogue. And that dialogue may, I don’t know how it’ll go. I’m optimistic. But I don’t know at the end of the day. But I see that as our role.”

With a bigger event looming on April 1st, this may not be the last time we hear about an Anonymous Donald Trump hack or see a video about it.