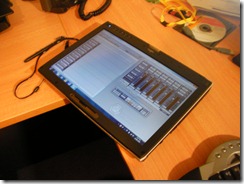 I’ve now spent about two weeks full time with the multi-touch Fujitsu T900. I have been interested to see how capacitive touch works with Windows on a daily basis since there has been a lot of suggestion in the IT media (including this website) that Windows is not designed for touch due to its orientation around cursor control. On the surface it seems reasonable…

Touch is not new to me as I’ve had many touch screen devices in my Tablet  history, starting with the Compaq iPaq PDAs, then the Samsung Q1U, Gigabyte M1028 Touchnote, Viliv S5 and X70 and recently the Apple iPad. Of course those first few devices were resistive touch, and they worked best with a stylus.

Windows was not really a great finger only touch experience on any of those devices, and the iPad breaks the mould because it is of course perfectly suited to finger input and I’ll explain why.

From my time with the T900 I have come to believe that the problem doesn’t really lie with Windows at all – and I’m talking exclusively about Windows 7 here. The problem with touch on Windows involves 2 simple things:

Let me start with hardware design… At the CeBit Exhibition in Sydney last month I had a play with the Hanvon B10 tablet. It is a basic slate tablet with a capacitive touch screen (no stylus) and I was surprised at how easy it was to control the Tablet using fingers only. It was easy because of one key feature:

Glass to the edge

A touch screen tablet must have glass that goes all the way to the edge of the screen bezel or at least have a bezel that is flush with the glass (i.e. not recessed). That completely eliminates one of the major problems with the windows touch interface – getting into the top right corner to close and minimize windows.

The Hanvon B10 features glass to the edge, so does the brand new Motion J3500 (or at least the bezel does not protrude) and I don’t need to tell you that the iPad has a “magically awesome breathtaking” glass to the edge design. These companies put thought into the design of their touch tablets and their users do reap the benefits of a good touch experience. The T900 and other tablets (including all of my previous resistive touch tablets) have a recessed screen and that interferes with touch input in the corners. Personally I can live with it, but it’s not a great experience for newcomers.

The second thing that I noticed about touch and Windows relates specifically to 3rd party software that is mouse oriented. To give you an example, I have seen musicians embrace Tablet PCs as a more natural way to record and perform music via PC. Touch tablets with loads of processing power like the Fujitsu T900 or Motion J3500 with Intel Core i7 make a lot of sense for this kind of work (or play). In my testing it was of course no surprise to find that the applications are often not perfect for touch.

The awesome (and free) Kristal Audio Engine is a 16 track recording and mixing application for PC . Its interface is a metaphor for a real digital recording deck with lots of sliders, knobs and controls. Now the application works perfectly with mouse or an active digitizer pen, but the tiny buttons and interfaces are a little bit harder to hit with your finger. Simple and small changes to the UI like bigger sliders and buttons would make this a killer application. Why pay thousands of dollars for a mixing desk when you can do more with a touch tablet for less? 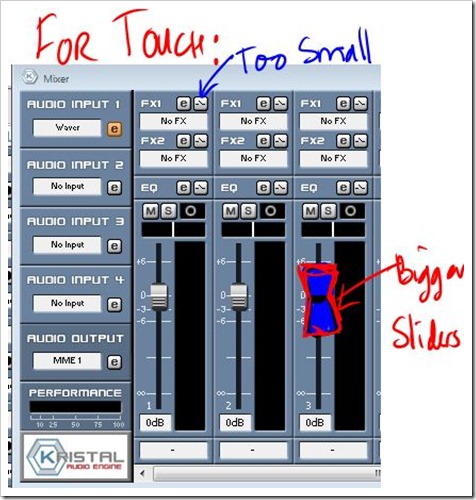 Optimising your existing application for touch is smart business

A software company with an existing windows application like Kristal (or its non-free big brother Studio One) can easily optimize their application for touch just by making the interfaces a little bit bigger. Then they get to claim “built for touch” bragging rights and they can open up whole new markets for their software by doing so. 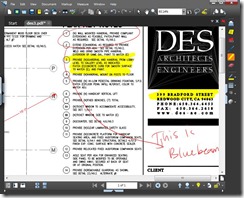 This model has already been proven by companies like Bluebeam Software who have built their remarkable business on that back of supporting Tablet PCs. Amongst dozens of competitors in the PDF space (even giant ones like Adobe) they have built a product that stands out in the market. Their decision to support Tablet PCs opened up massive opportunities in unexplored vertical markets for them and their brand continues to build because of it.

Even down here in Australia I bump into Bluebeam PDF Revu all the time, even on regular (non-tablet) PCs. Best of all, Bluebeam can actually make money because they don’t have to sell their product in a sea of mediocre trinkets for five bucks!

iPad has a point too

Just because the cursor point on your iPad and iPhone isn’t visible doesn’t mean that it’s not there. The reality is that all touch screen hardware reports back to the OS with a location point. In other words, a dot that represents an approximation of the location of your much bigger finger.

So in a way the advantage of the iPad has is that its apps are designed only for touch, not that it doesn’t have a cursor. The developers are targeting this interface and they know to accommodate fingers that are not very accurate.

But the game is not lost for Windows developers. Touch interfaces are still fascinating for regular people – yes even on Windows. Software developers who optimize their existing applications for touch will lose nothing in that their applications also become more usable for pen and mouse.

Also, by using hardware as a point of interest they also get to show off something that is cool and unusual thereby getting their software in front of a much larger audience and standing out from the crowd. The public fascination with Microsoft Surface is a great example of the interest that can be achieved by adopting touch.

Accommodating touch is a very easy challenge for windows developers to take up and the developers who embrace touch on windows will be able to reap much bigger rewards than those on other platforms. At the same time their customers will get to touch and feel their software and that’s just a whole lot more fun!