While Apple doesn’t have any extra Lightning cables to sell for the moment, it’s probably not a good idea to buy third-party cables instead thanks to a chip inside the new connector.

According to Apple Insider, Apple’s Lightning cables contain what looks like authentication chips inside the tiny housing. Those chips are likely the cause for the high price, and could make unauthorized third-party cables unusable.

The authentication chips means third party cables with the chips simply won’t work with the new iPhone 5. The chips lie between the USB power pin and the V+ wire. To the average user that means without the chip, no power will flow from the USB port into the device plugged into the cable. 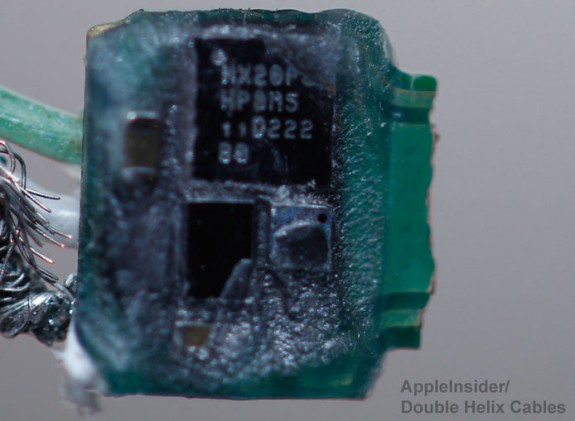 There’s a good chance that Apple won’t let other companies produce Lightning cables with the required chips. Or, more likely, Apple wants to control who can and can’t make third-party Lightning cables.

These chips could even be the reason why we don’t have any Lightning accessories yet. Apple doesn’t like to share its plans with third-party manufacturers so they likely weren’t able to make accessories before Apple announced the iPhone 5 and the Lightning cable.

We don’t know if these same chips are inside the Lightning to 30-pin dock connector adapters, but if they are, that could mean the cheap third-party alternatives we saw recently won’t work. For the sake of those that did buy them, we hope the chips aren’t there. Either way, this is a good reason to avoid any third-party accessories that aren’t supported by Apple.