Apple’s iPad tablet may launch at a separate event following the speculated launch of the next generation iPhone 5S‘s debut this fall. According to Japanese blog Macotakara, the iPad will debut towards the end of the year.

The publication didn’t specify if the second generation iPad mini, which is being rumored with a Retina Display, would debut at the same later date as its bigger brother.

Many had been hoping that Apple would include all iOS hardware to debut at the same time for the fall showcase, including the iPod, iPhone, iPad, and iPad mini. However, it Macotakara is accurate, then Apple may hold a separate event for the tablet’s introduction.

Recent rumors suggest that the full size iPad with its 9.7-inch display would come with a thinner footprint and smaller form factor that’s achieved by shrinking the side bezels, similar to the design that Apple had debuted with the iPad mini, a tablet with a 7.9-inch display.

The device is expected to be 25 percent lighter and 15 percent thinner than the current fourth generation iPad.

Additionally, now it’s also said that the microphone of the iPad would be moved to the rear of the device towards the center top adjacent to the rear-facing iSight camera. An image posted on Macotakara shows a microphone hole on the rear casing of the iPad 5. 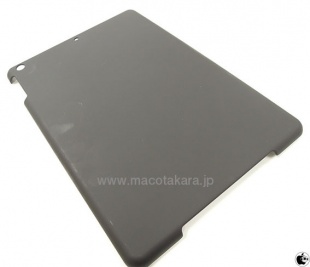 Apple is also expected to move to a new touch panel, called a GF2 panel, that would help facilitate slimming down the iPad and building more power efficiency into the tablet. This would also allow the company to use a slightly smaller battery.

One of the problems with moving to a Retina Display between the iPad 2 and the third generation iPad tablet, is that Apple had added back some of the weight and heft that was shaved off from the original iPad to the iPad 2.