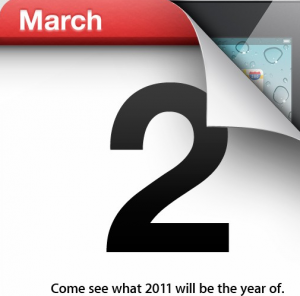 Apple doesn’t give the world a whole lot of time between inviting press to a product launch event and actually holding the event. But the world now has fair warning that just about every tech publication will be focused on Apple’s big event next Wednesday.

That means we’ll all either be at the Apple event or watching a live stream of the event in the morning, writing about Apple’s announcements for a good chunk of the day and then debating the merits of the new iPad with our colleagues, readers, friends, spouses and estranged relatives for the remainder of the day.

Apple only holds a handful of launch events per year and the company almost always announces major hits every time. The Cupertino company releases minor updates without holding conferences rather than pulling together a big show just for the heck of it.

Knowing that thousands of our readers are very likely to actually buy the products Apple’s announcing makes it all the more important we direct more of our attention towards Apple. Oh yeah, regarding that whole ‘buying’ thing – Apple’s always forthcoming with pricing and release dates when it holds press events. As in “The ____ will be available for $__ on March __ at Apple Stores and online. Pre-orders will start ____.” None of that funky “later this year” or “pricing isn’t final” business that we hear way too often from Apple’s competitors.

Almost every time Apple holds a press event I end up hearing from at least a couple of PR and marketing folks about how disappointed they are in the lack of coverage about their own new products by tech and mainstream publications. They can’t seem to fathom why in the world an announcement about a new free iPhone app or laptop case was overlooked in favor of countless iArticles.

Nothing good can come of pitching new products to editors the day a new Apple product launches. Even if you do score some headlines the same day as a new iDevice, the articles will only get a fraction of the attention they would a couple of days later.

For those of you who haven’t figured it out yet, an inordinate number of media types use Apple’s products and spend  a chunk of the day scheming to figure out how they’re going to fit the new iPad into their budget.

So what’s the answer if you work in consumer tech PR, but not for Apple? Use it as an excuse to take a day off. It’ll save everyone a lot of headaches. If you insist on working on March 2, at least do your best to convince your colleagues to move any announcements away from that date.