Don't Plan on an iPhone 5 Release in June

We all love the Foxconn employee that leaks design specs or blurry shots of new Apple products, but for the most part employees are as quiet as Apple about the new products they are working on.

At least that was the case before Foxconn recruiters started blabbing about the iPhone 5 production and release dates.

Last week we told you about a report that Foxconn was on a hiring blitz to prepare for the production and launch of the iPhone 5, and this week another Foxconn recruiter claims to know when the iPhone 5 will launch. 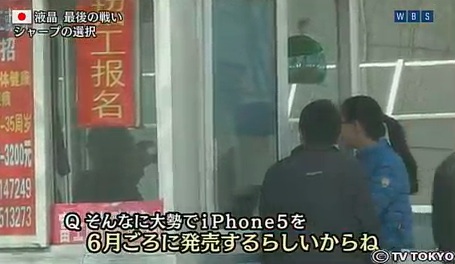 A Foxconn recruiter claims the iPhone 5 will launch in June.

Speaking to World Business Satellite, a Tokyo TV program, an Foxconn recruiter said that the hiring binge at Foxconn is needed to prepare for the release of the iPhone 5 in June. You can watch the interview on TV-Tokyo, at the 7:10 mark, but unless you speak Chinese you won’t get much out of it. According to Cnet, the translated part is, “Because it seems it will go on sale in June,” thought that is translated from Chinese to Japanese to English.

While it’s easy enough to believe that a Foxconn recruiter is telling potential employees that they will be making the new iPhone as a means of attracting more interest, the idea that a recruiter was breifed on Apple’s plans is ridiculous.

Apple is notoriously secretive about product launches, keeping even the closest partners in the dark as long as possible to prevent leaks to the media.

The best information available points to an iPhone 5 launch this fall, but even that is just educated speculation. The iPhone 5 may not even be called the iPhone 5. It is the sixth iPhone and will likely have 4G LTE, so Apple has several naming conventions available.

And there’s always the, “new iPhone.”