As a super-short teaser revealed a few weeks ago, Bethesda Softworks, the company that now controls the long-running Doom franchise, is working on a reimagined version of Doom for release in 2016.

Bethesda confirmed the Doom 2016 release at a games showcase just before the start of this year’s Electronic Entertainment Expo, what’s being commonly called just E3 2015. The minutes long teaser for Doom 2016 didn’t include a ton of pre-rendered animations or complicated talk. Instead, the Doom reveal trailer was roughly five minutes full of in-game footage, things that players can expect when they get their copy of the final version of the game. 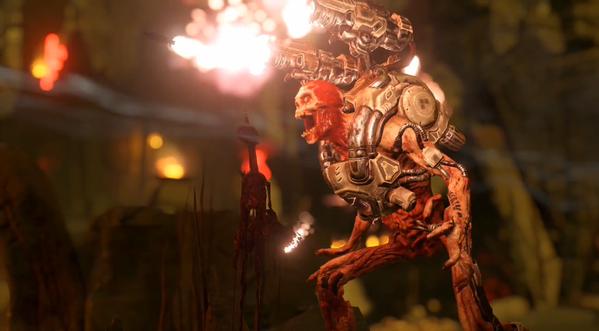 The trailer begins with the player making their way through what at first appears to be a pretty quiet structure. Soon the player is overrun with demons and enemies. Bethesda is promising new weapons and dangerous enemies for Doom 2016 and they seem to be delivering on that.

If there was a theme for the trailer it has to be sheer gore. All through the trailer the player lurks from room to room, killing anything that move. There’s a solid 40 seconds during the Doom 2016 trailer where the player rips apart different demons with his bare hands. What we can only assume is blood and body matter gush from the enemies bodies and coat the floor in red goo. At one point the player actually rips the forearm off one human completely. He then uses that hand to unlock a door.

The first gameplay showed on stage of Doom 2016 ends with the player being attacked by a vicious demon himself, having his arms ripped off by a demon sitting on his chest. A second clip of footage taken directly from the game drops players in the middle of fiery pit where blood runs across the landscape. In the Doom universe, this is hell and we see the player break the necks of demon demons and take on detailed, enemies.

ID, the game’s developer, and Bethesda are promising more than just a great single-player experience for Doom. When it arrives o store shelves this new Doom will include what Bethesda describes as “arena-style” multiplayer combat so that players can use the weapons from the single player experience to destroy each other in the same manner. In a nod to other first-person shooter, ID and Bethesda say that Doom 2016 will include SnapMap, a built-in way for players to create and customize maps based on their favorite play types. Teased at the E3 2015 Bethesda Showcase was Bethesdanet, a online service that stitches together the company’s websites, games – like Elder Scrolls Online and Doom 2015 – into one single cohesive experience.

No doubt, fans are excited for Doom 2016. Going back to the early 1990s, Doom helped spawn a new generation of games. Instead of their character’s body, Doom had a camera that let players feel like they were the protagonist. Today we call these games first-person shooters, but early on there was nothing else like it. Millions of fans still love Doom today, which it’s a good idea to introduce a new Doom game if done correctly.

For now, Bethesda and ID aren’t revealing a specific release date for Doom beyond saying that it’ll arrive sometime within the 2016 calendar year. The studio is ready to confirm that only games with current-generation consoles or a pretty powerful Windows PC will be able to play the game. Doom 2015 won’t be coming to the Xbox 360 or PS3. The game is Xbox One and PS4 only as far as gaming consoles are concerned.

Bethesda says that Bethesdanet is already powering Elder Scrolls Online. When we’ll see the rest of the promised integration is a bit unclear.