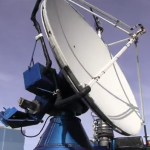 We met what has to be one of the most extreme mobile tech users in the world at CES 2012. Josh Wurman’s team drives Doppler on Wheels (DOW) trucks into storms with a team of researchers and a cabin filled to the brim with mobile technology. He explained to us that the best way to collect this kind of information is to get up close and personal with the storms.

When most of us think of rugged technology, we think of a rugged tablet or iPhone case. Wurman’s gear is tough enough to survive hurricanes while logging terabytes of data, which can eventually be used to save lives. The DOWs are outfitted with 11 enterprise-grade Lenovo PCs that are used to process the data being collected from the Doppler radar on the back of the truck. The truck employees three satellite modems so the team can stay online and coordinate their activities with remote teammates.

The Doppler on the back of the rig isn’t the only piece of technology that collects weather data. Wurman drops tornado pods into the paths of storms. After the storm passes he plugs his ThinkPad into them to extract data, which gives him a more complete picture than relying on the Doppler on its own.

The DOW and Josh Wurman may look familiar  to if you’ve ever watched Discovery’s Storm Chasers series. Here’s a clip taken after the April 27th tornado in Tuscaloosa that shows just how dangerous Wurman’s work is and the conditions the DOW has to survive.