Google has finally made offline eBook reading available via their Chrome web app. Now users can save the books for offline reading right in the browser and not have to worry about having an Internet connection in order to access them.

For some reason it’s taking Google a really long time to get their act together with making their apps and services available offline. This surprises me only because earlier this year the company was heavily pushing their Chromebooks with Chrome OS on board, which are only useful when there’s an Internet connection.

Chromebooks are the most likely benefactors of this particular feature since there are plenty of ways to download a Google eBook for offline reading on one’s computer, smartphone, or tablet. 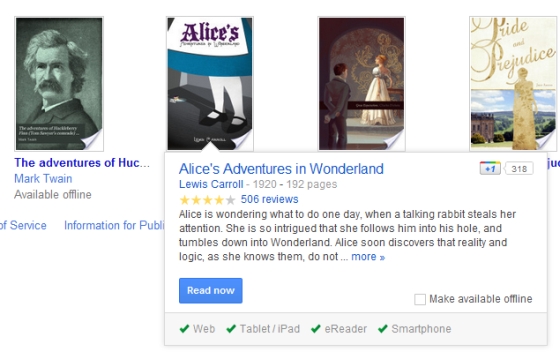 It’s a welcome addition, but I can’t help but feel like the company should spend more time making Google Docs offline-friendly. Perhaps this is a precursor to that.

Other than the ability to search for and read Google Books, the app isn’t very notable. It has some basic eReading functionality, such as changing the font and searching within a book, but nothing fancy like bookmarks or notes. If it had some more features I might say that this had potential for students.

Overall, I feel like Google’s foray into eBooks is half-hearted at best. The lack of functionality in their apps, both for Chrome and for Android, doesn’t make them worth using over Nook or Kindle. Earlier this year they partnered with iRiver to bring an eReader to market, but it wasn’t so impressive.