Doxie One Mobile Scanner Makes Scanning Without a Computer Easy

The Doxie One mobile battery-powered scanner makes scanning on the go so easy the user doesn’t even need a computer, thanks to the built-in SD card port.

We’ve seen mobile scanning before, but two things set the Doxie One apart. First, it costs less than ones we’ve seen. It’s just $149.99 while competitors cost closer to $200. Second, it includes a built-in SD card port and even comes with a 2GB card. All documents or images scan directly to an inserted card.

The user doesn’t need to connect to a computer ever. Just pull the card out of the slot and place it in a computer’s SD card reader, or even use something like the Apple iPad SD card reader, and view the scanned documents on the computer or tablet. With a device like the Eye-fi card, the user doesn’t even have to remove the card from the Doxie One.

The scanner has a cheap plastic look to it. However, it feels sturdy enough to carry in a computer bag. The dark gray plastic collects fingerprints. 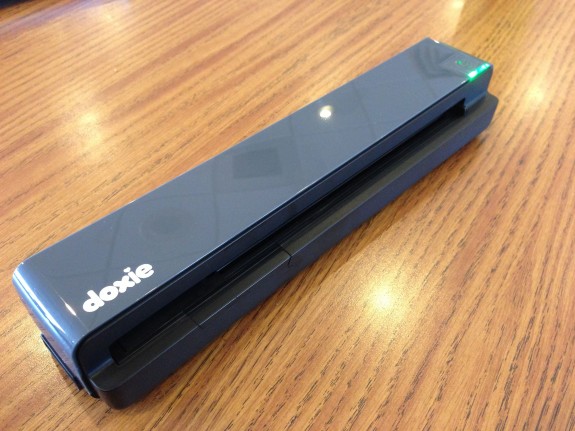 The Good: Great software and easy to use with SD card interface meaning no computer necessary
The Bad: drains batteries and can’t power it via included USB cable

Place the Doxie One on a table or desk and it won’t slide around thanks to the rubber feet on the four corners. 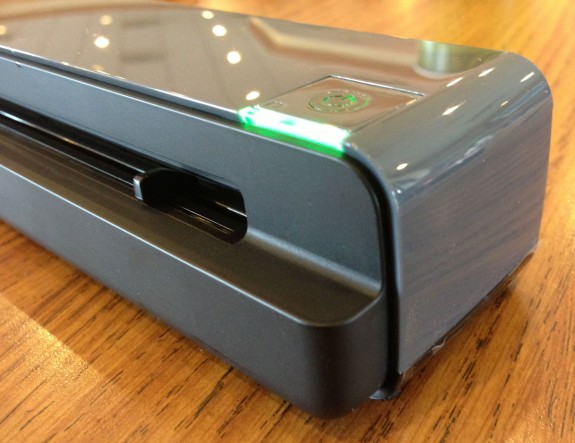 An LED on the right indicates the scanner’s ready state and errors, like a jam or low battery.

The Doxie One works like most sheet fed scanners with a paper guide. The paper moves smoothly through the scanner and only jams when the battery runs low or the user mis-feeds the paper. Thin receipt paper and thicker cards scanned beautifully. 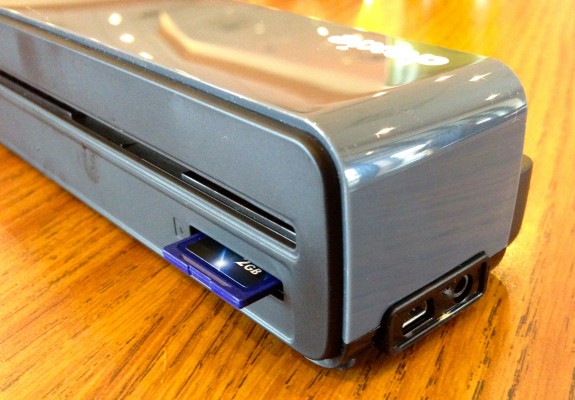 The mini-USB and power ports sit on the left side of the Doxie One. The power port connects to an AC adapter for plugging the Doxie One into the wall. The cable runs a little short, so keep an extension cord handy or get close to a wall outlet.

The USB cable doesn’t charge or power the scanner, but it does let the user import the images from the SD card into the computer. In fact the instructions warn the user that he or she shouldn’t plug the Doxie One into a computer while scanning. That’s a big disappointment.

For scanning photos, the Doxie One comes with a photo scanning sleeve to keep older photos from getting ruined while going through the sheet feeder. 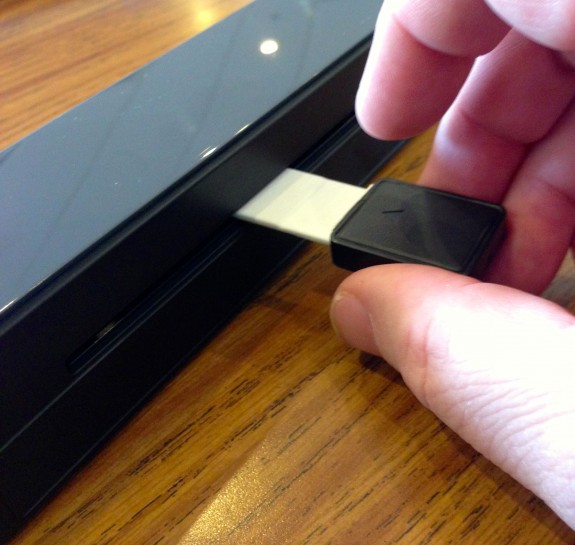 The scanner includes a swab to clean it when it becomes dirty (see above). That’s a nice inclusion since ordinary cleaning tools won’t work.

Since the scanner doesn’t come apart it won’t scan odd-shaped books or booklets, something more expensive scanners can do.

The Doxie software offers a simple and easy to use design. 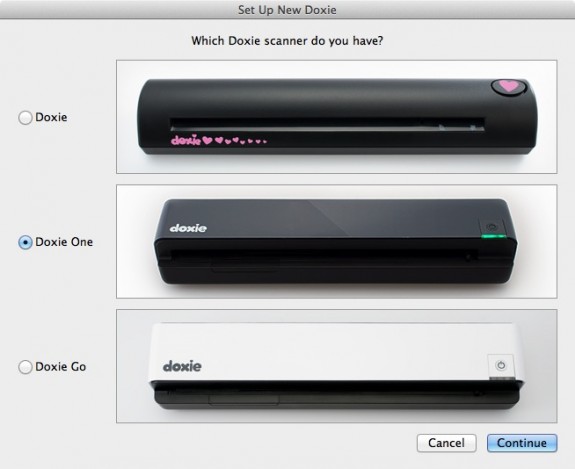 Pick the Doxie scanner to use with the software. They sell three models.

Install the software (both Mac and Windows versions), run through the setup wizard and tutorial and it’s ready to go. Once the software detects the scanner on a USB port or an SD card in the computer’s reader, the software offers to import images. 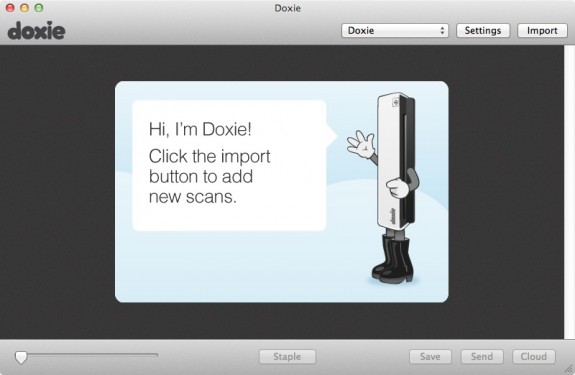 The user can do simple color and exposure correction as well as crop the image and fix rotation issues. Then export images as JPG, PNG or PDF files. 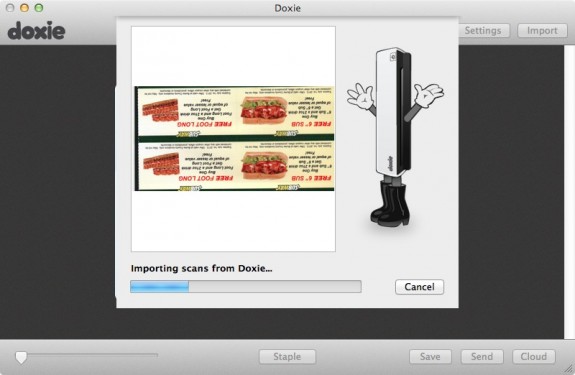 We love the software and found it so easy to use. Doxie could make a nice profit just selling the simple software in the Mac or Windows 8 app store. 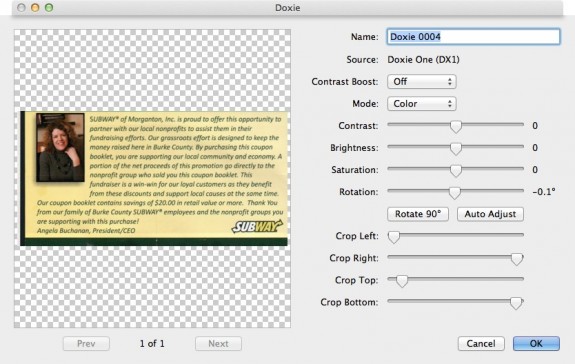 The Doxie software will export sheets with text as PDF files. It uses the popular and powerful ABBY OCR engine. The user can search PDF files after saving them with OCR. The OCR works great producing accurate PDFs. 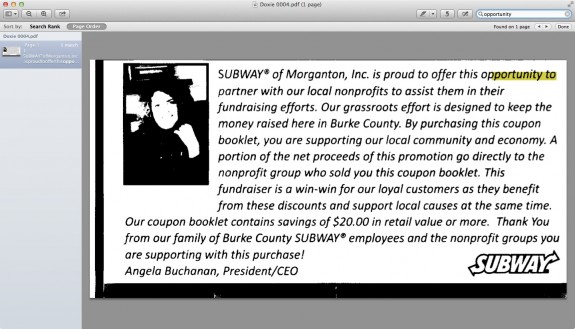 Saving a scanned file as a PDF with OCR made it possible to search and find words in this Subway ad.

We love the Staple feature. Select similar scans, like a group of receipts or multiple pages in a multipage document, and then click Staple to group them. Select a group and then click Unstable to un-group them. 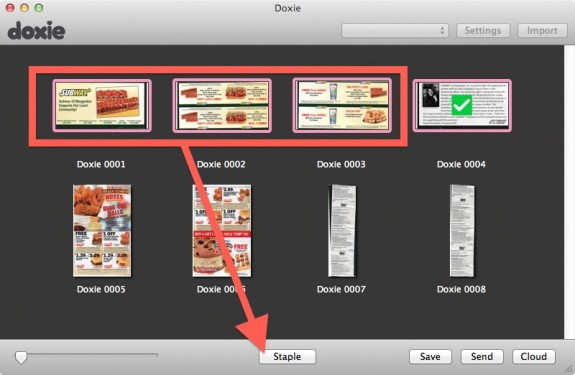 Select multiple scans and then click Staple to group them

The user can also export scans to a few popular cloud services or installed software on the user’s computer. For example, we exported a PDF file to Evernote and posted images to Flickr. Doxie provides each user with a free Cloud sync account to sync scans across multiple computers. 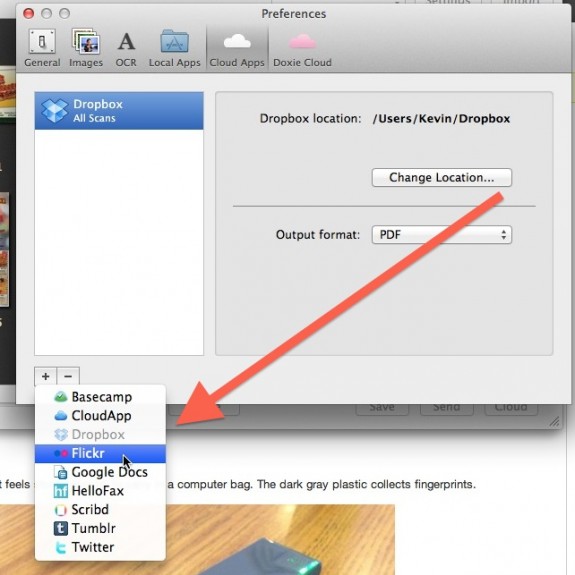 The Doxie software just works. Most scanners ship with lousy software that the users cringe while using. The Doxie app surprised us with simple elegance.

The scanner itself works well under the right conditions. Scanning a sheet of paper results in easily readable scans. Photos looked faithful to the original and text resulted in accurate and editable documents thanks to the ABBY OCR engine.

The setup wizard shared a pleasant surprise. The Doxie software works with the Eye-fi x2 Wi-Fi SD card. The user can plug an Eye-fi card into the scanner and it will scan the documents and then automatically send the images to the software using the Eye-fi software loaded on the same computer as the Doxie app.

Eye-fi cards include a built-in Wi-Fi radio and send their images over Wi-Fi to online storage, a computer and now to the Doxie software. 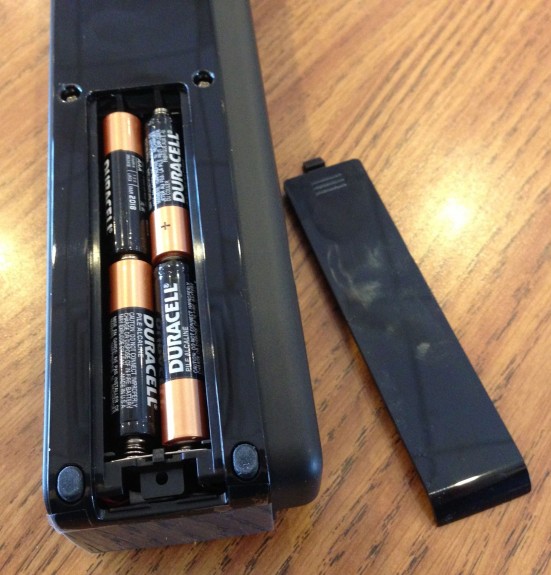 Don’t make the mistake we made using alkaline batteries. They won’t last. 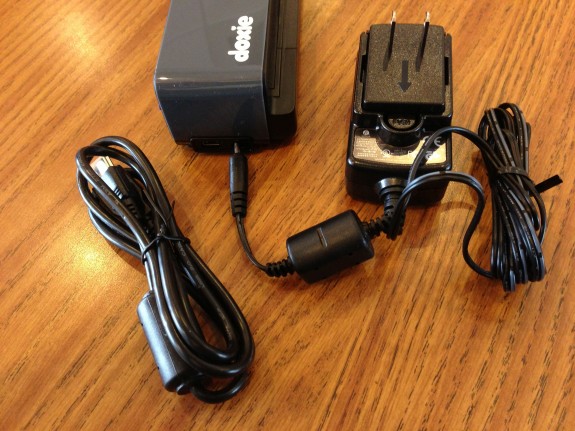 We wish the USB cable powered the scanner. We wish it at the least included a rechargeable battery that charged while plugged into a computer’s USB port during sync. The user could leave the AC adapter at home and use it on battery power. This weakness alone dropped the product’s rating down a notch.

The use of an Eye-fi card means the user doesn’t even need to remove the SD card. Just let it sync over Wi-fi to the Doxie software and go from there.

With a  built-in rechargeable battery and the ability to charge or power the scanner via USB would make this a nearly perfect mobile scanning solution. Still, the $149.99 Doxie One deserves consideration for any road warrior’s mobile office. Save a few bucks at Amazon, where it’s on sale for under $145. At either price it’s well worth the cost.