HTC announced this morning that upcoming smartphones will feature enhanced audio thanks to technology from Beats by Dr. Dre.

This is the same audio tech which we have seen in many HP notebooks and most recently in the HP TouchPad.

HTC has invested a reported $300 million in Beats Audio, forming a partnership that will improve the audio experience on HTC phones. Dr. Dre and Jimmy Iovine will remain “in the lab,” to keep the spirit of Beats alive.

The good news is that this partnership should bring better audio to your next smartphone, as long as its made by HTC.

What will Beats Audio Sound Like on the Smartphone? 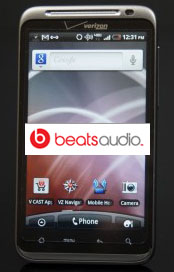 Beats Audio claims to deliver the music to your ears the way the artist wanted you to hear it. The Beats Audio experience varies from device to device, so we’ll have to see what HTC and Dr. Dre cook up.

The Beats Audio technology kicked off in notebooks and included speaker optimizations to make audio sound great over your notebook speakers as well as through the headphone jack. Beats made the jump to HP netbooks earlier this year, which included a focus on the audio experience through the headphone jack, with minor emphasis placed on the speakers.

Based on what we know about Beats Audio, we anticipate that HTC smartphones with Beats Audio will feature a better than average smartphone audio experience over the speakers, but will save the real show for your headphones.

This means that when you plug-in your headphones to listen while on the go, you should get a better audio experience, but it also means that any dock or line out you use should have higher quality audio to work with.

I wouldn’t be surprised to see HTC and Beats launching a collection of smartphone docks and speaker systems that make use of the Beats Audio technology.

We could potentially see Beats Audio in the HTC Vigor which may launch in October, or one of the other 8 HTC smartphones arriving this fall, but nothing is for sure just yet.