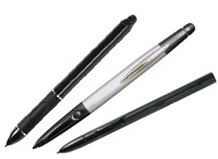 Jack Dorsey, co-founder of Twitter and more recently Square, lays out three keys to success at The 99 Percent. Top of his list? “1) Draw: get your idea out of your head and share it”. Great advice, and it ties into something we’ve said again and again and can’t say enough: tablets are ideal tools for getting ideas out of your head.

Ideas are wonderful, but you can’t do anything with them while they’re trapped in your noggin. They need to be set free.

Pen input lets you easily write out your thoughts, either freeform or tied together in a mindmap using software like one of our favorites, Mindjet MindManager. And of course, I must mention OneNote and Evernote as store-alls for your expressed thoughts. More importantly, pen input doesn’t limit you to words. Dorsey advocates drawing your ideas, not writing them. Throw in some words as needed, but don’t be constrained by the rigidity of text.

Even if you are tied to text, such as on touch-only tablets like the iPad or on a phone, there are plenty of mindmapping apps to help you throw out your ideas with words and icons. We’ve seen iPhone apps for Mindjet and MindMaker. James Kendrick wrote up a solid review of iThoughts for the iPad. Mindmaps let you rearrange your thoughts, visualize the connections, and organize the mess.

I personally prefer to let my ideas stew in the back of my mind for a while to let my subconscious work on them, but when it’s time for action, that’s when my pen goes to work. Not saying pen input is the only or best way to follow Dorsey’s advice, but it sure makes it easy.