In March, Zynga purchased Draw Something developer OMGPOP for about $200 million. Now, that’s looking like a bad investment as the developer’s popular game is losing users quickly.

According to The Atlantic Wire, Draw Something’s popularity peaked on the day that Zynga purchased OMGPOP. At the time the game had about 15 million daily users with a steady upward trend. The game took a downward turn shortly after, losing about a third of its daily users in just a few weeks.

Today Draw Something has 10 million daily users on average. That’s still a lot, but losing 5 million users in a few weeks isn’t a good sign. The game’s casual monthly user base is declining as well. Players just aren’t drawing as many things as often, it seems. 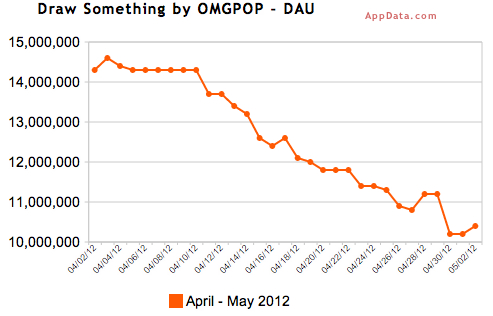 The numbers come from AppData, which only measures Facebook logins for the game. There is an option to play the game without using Facebook, but many users take advantage of the Facebook login.

Draw Something is still number 5 in the iOS Top Paid chart and number 6 in the Top Free chart, so new users are definitely downloading the game. The game also recently made its way to the Kindle Fire. It’s possible that the game is now just churning users, replacing old players with new ones. If that’s the case, however, the older players are leaving the game faster than new players are adopting it.

The game’s declining popularity could be part of why Zynga’s stock isn’t performing all that well at the moment. Zynga could also be the reason why a number of people stopped playing the game after the acquisition. Zynga doesn’t exactly have the best reputation. To some, it has an even worse reputation than EA.

Draw Something did recently receive an update with some new features and new words. The update is likely responsible for the small uptick in users seen in the graph above, but it wasn’t enough to keep those users. Even after the update words repeat relatively often, which can make the game more tedious than fun.

There’s only so many times a person can choose between “pyramid,” “tools,” and “milkman.”